Read the latest regarding our Fall Term opening. 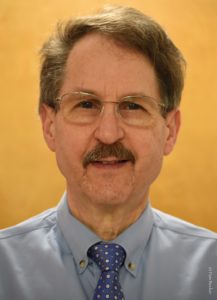 Howard Reich is an Emmy Award-winning filmmaker, author of six critically acclaimed books and a longtime arts critic and columnist for the Chicago Tribune.

Much of Reich’s work as an author, journalist and speaker—including at Elmhurst University—has focused on the Holocaust and genocide. The son of two Holocaust survivors, Reich discovered his parents’ never-discussed story and brought it to the screen in Prisoner of Her Past, a PBS documentary he wrote, co-produced and narrated.

He brought this story to Elmhurst University in 2010, as that year’s Holocaust Lecture. He returned in 2017 to reflect on the work and legacy of Nobel Peace Prize laureate Elie Wiesel. At the time, Reich was developing his recently published book, The Art of Inventing Hope: Intimate Conversations with Elie Wiesel. Reich worked on the project with Wiesel during the last four years of Wiesel’s life.

Reich has covered music and the arts for the Chicago Tribune since 1978, and currently is in post-production on his third documentary, Left-Handed Pianist, based on his Chicago Tribune stories about a man wounded by his father in childhood who launched his concert career at age 78.

Reich has a bachelor of music degree in piano performance from Northwestern University, and has served on the jury for the Pulitzer Prize in Music four times. In 2015 he won an Emmy Award for the documentary Kenwood’s Journey. He also has won eight Peter Lisagor Awards from the Society of Professional Journalists, and the Chicago Journalists Association named him Chicago Journalist of the Year in 2011. 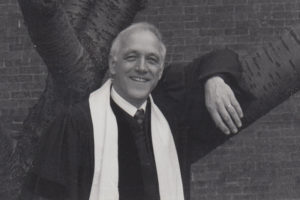 Richard L. Stanger has had a long and distinguished career as a minister who served congregations around the country, and as a professor and chaplain in higher education. He also represents a family with connections to Elmhurst University that reach back to 1891, when his grandfather, Christian, graduated from Elmhurst and stayed on for many years as a teacher.

Richard Stanger’s father, Robert, graduated from Elmhurst University in 1918 and was elected president of the University in 1957; the same year that his son, then a student at Elmhurst, was elected president of the student union. Richard Stanger received several honors as a student, and was part of the basketball and tennis teams. He was inducted to the Athletic Hall of Fame in 1982.

He met his wife, Joan Panos, on campus, and they enjoyed a long marriage until she passed away in April 2015.

As a United Church of Christ minister, Stanger spent much of his career as senior minister at several Plymouth Churches around the United States, including in Ft. Wayne, Indiana, Brooklyn, New York and Miami, Florida.

The Stangers have three children and nine grandchildren. Their daughter, Allison, became the fourth generation of Stangers to attend Elmhurst University when she entered in 1978. The Stanger family received the Founder’s Medal in 2016, in honor of their many contributions to the University. Stanger lives in Greenwood, Ind.

Return to the Commencement homepage

Philip Prather, Golden Anniversary Class of 1969, will greet each 2019 graduate on behalf of the Elmhurst University Alumni Association. After serving in the U.S. Army, Prather worked in the banking industry for 31 years.

He has since volunteered countless hours overseeing maintenance and grounds at Wood Dale Community Church, where he has been a member since his youth.