$300,000 Gift from Elmhurst U. Alum to Benefit Athletic Department

August 2, 2021 | by the Office of Marketing and Communications 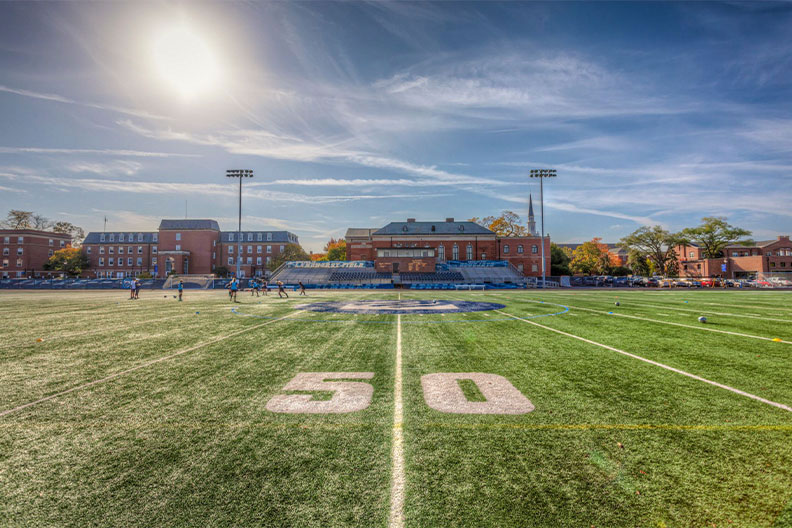 Elmhurst University alumnus, physician and entrepreneur Aaron Rossi has given the University a $300,000 gift to fund a new video scoreboard and benefit the Men’s Soccer Team.

As an Elmhurst student, Rossi was an original member of the Men’s Soccer program, which was established by Head Coach David DiTomasso in 2004. Rossi graduated from Elmhurst U. ­­in 2006.

Dr. Rossi made the donation and gift to show his appreciation for DiTomasso and the coach’s impact on  Rossi’s career and life goals. While attending Elmhurst, Rossi was a biology/pre-med major, a captain on the Men’s Soccer team and an intern at Northwestern Memorial Hospital in Chicago. Participating in multiple activities provided him with structure and discipline, two qualities that would be a catalyst to his achievements as an entrepreneur, he said. As the CEO of Reditus Laboratories and other medical-related businesses in central Illinois, Dr. Rossi and his companies have been widely recognized for their innovative work and extensive assistance to the State of Illinois during the COVID-19 pandemic.

“I am honored to be able to give back to the University that gave me so much and helped give me the discipline and drive to go after my dreams,” Dr. Rossi said.

“We’re thrilled to accept this exciting gift from Dr. Rossi,” said Elmhurst University President Troy D. VanAken. “It speaks volumes not only about the powerful relationships Coach DiTomasso forges with his players, but also about how our students’ experiences at Elmhurst can influence and inspire them after they graduate.”

Rossi received multiple awards throughout his time at Elmhurst, and is an inductee into the Men’s Soccer Hall of Fame. He was also selected to the Adidas All-Region Team, and was named to the CCIW First Team All-Conference for three years in a row.

“Relationships are the foundation for all successful people, and Dr. Rossi truly cares about the success of our student athletes on and off the field,” DiTomasso said. “As a founding member of the Men’s Soccer program at Elmhurst, he led the team in every way possible, from mentoring young players to eventually becoming a captain. He and I have established a friendship that goes well beyond player/coach levels.”

The new video scoreboard is scheduled to be installed at Langhorst Field in 2022 when other major renovations to Langhorst are completed.

“Dr. Rossi’s specific monetary gift to Men’s Soccer will impact our program now and in years to come, and the addition of the Rossi Family Scoreboard to Langhorst Field will be huge for the campus community as a whole,” DiTomasso said. “It will allow us to showcase our teams more effectively, generate new revenue streams, and bring a more exciting atmosphere to live events. I am truly grateful for his continued support.”

In June of 2021, Pekin Mayor and State Rep. Mark Luft (R-Pekin) recognized Dr. Rossi and Reditus Laboratories for their hard work. Luft noted that the laboratory remains a critical part of local efforts to fight the pandemic, and awarded them each a Certificate of Recognition from the State of Illinois House of Representatives.