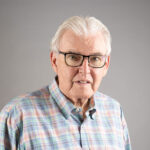 I was raised Roman Catholic at a time when the Catholic Church sent the message that as Catholics we were the ones going to heaven. My parents who were practicing Catholics taught me that all people who had a belief in God, practiced their faith and cared for others in the world had a place with the Lord when they left this world regardless of their religious affiliation.

Growing up, my family had a very close relationship with a family (Fielding’s) who were members of the German Evangelical Synod, which became the United Church of Christ (UCC). I remember holiday dinners with the Fielding family and hearing discussions about Fielding’s relationship with Rev. Rudolf Schade and Elmhurst College. So when I decided to venture into the world of higher education one of the institutions I applied to was Elmhurst. I first came to the institution as an adjunct faculty member in the fall of 1970. When a full-time faculty position became available for the Fall Term 1974 I applied for the position for several reasons, one of which was the religious-based focus of Elmhurst that honored individuals from various beliefs both believers and non-believers.

In my first several years as a full-time faculty member when it came to the discussion of Catholics on campus, it was one that mainly focused on the large percentage of faculty and students who were Catholic on a UCC campus. There were ongoing discussions of why would Catholic students attend a UCC institution of higher learning, with many theories and ideas being shared generally resulting in good discussion but no real conclusion. In those days it was mostly concluded that the large Catholic population celebrated in their local parishes or at IC if Catholic students lived on campus.

The big change in the religious life of the campus occurred when Rev. Scott Matheney arrived on campus. Many things began to happen, including the addition of co-chaplains representing several religious denominations. The Catholic Diocese of Joliet assigned religious and/or laity to the roles of co-chaplains which enriched the quality of Catholic life on campus by offering mass on campus for the University community, along with the development of the Catholic group for both students and university employees (The Catholic Group). Another addition that spread the message of “all are welcome” was the development of the religious lecture series. For the Catholic community, the addition of the Cardinal Joseph Bernardin lecture brought to campus many prominent Catholic scholars and practitioners who have addressed issues facing our society from the Catholic point of view.

As we move into the beginning of the second 150 years of the University, Scott is working with IC and Father Tom Paul in the development of a Newman Club, which would take the development of Catholic life on campus to a new level.

Over the years, in addition to Scott’s influence on the religious life on campus, others such as Dr. Bryant Cureton, Dr. Bill Nelson, Rev. Bob Ullman, Rudolf Schade Jr., the late Dr. James Barry (Director of Counseling and a former Jesuit priest), Dr. Janice Foder, Rev. Chuck Mayer and Dr. Jim Smith have fostered the religious life of the campus. Over the years, the influence of Reinhold and H. Richard Niebuhr has been a part of the institution’s social justice and social responsibility focus of educating students to make a difference in the world.

Lawrence Carroll is a longtime professor of business at Elmhurst University.