‘A Perfect Time to Reinvent’

After thriving at Elmhurst, Amanda O’Brien ’21 is teaching English in France. 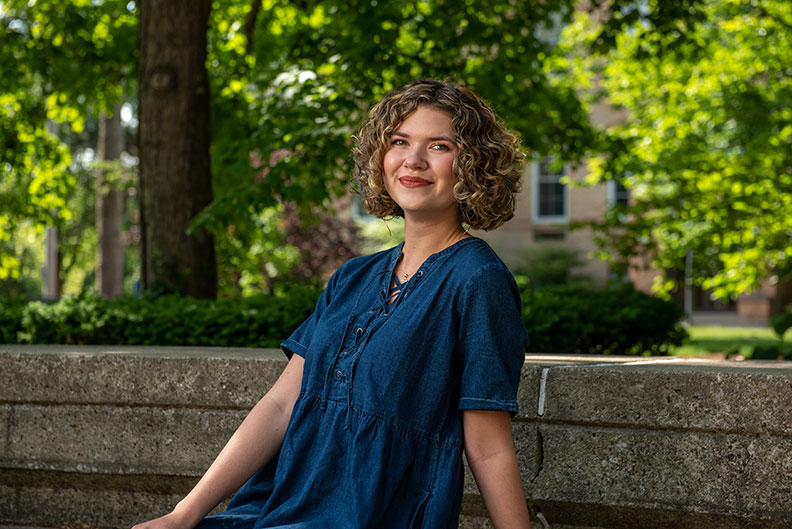 As a special way to mark our sesquicentennial celebration, we asked some of our students, faculty, staff and alumni to share their fondest Elmhurst memories, favorite campus stories and hopes for the future of the University. Read along as we roll out the entire series over the coming months.

Amanda O’Brien’s first three years on campus were under the Elmhurst College banner, but she’ll graduate from Elmhurst University. To her, though, it will always be “Elmy.”

“Even before the name change, I always called the school ‘Elmy,’” says O’Brien ’21, who earned bachelor’s degrees in early childhood education and French. “That made the switch easy for me!”

At commencement in May, O’Brien was named the 2021 Senior of the Year. In September, she put her French and education degrees to good use in France, where she’s teaching English for a year.

“If you had told me that four years ago, I would have laughed in your face,” she says.

What drew you to Elmhurst?

It was definitely the education program and a more intimate community. I didn’t want to just be a number on campus.

Where’s your favorite place to hang out on campus?

There’s a spot outside the Frick Center where I enjoy sitting called the Founders Common. It’s the perfect spot to sit outside under the trees, people-watch, read a book, do homework. I’ve even had a class or two out there, which was always a treat!

How do you feel about being at Elmhurst at this moment as the University celebrates 150 years?

After this crazy year we’ve had, it’s this optimistic and bright light at the end of the tunnel. The first class of Elmhurst University definitely had a trying year, and I’m really excited we got to celebrate it with an in-person commencement.

What do you see for the future of Elmhurst?

I’m looking forward to seeing how the organizations I’ve been a part of are going to change and thrive. After having everything shut down for the year, this feels like a total restart, a perfect time to reinvent. It doesn’t have to be all the traditions we once had. You can build your own traditions now.

The Alumni Association of Elmhurst University created the Senior of the Year Award in 1992.