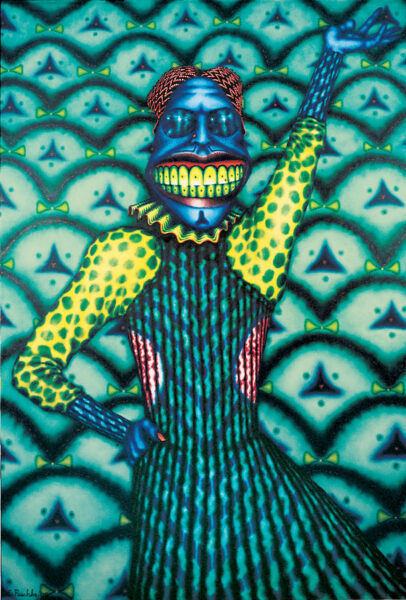 Ed Paschke was fascinated by the underbelly of society. As a young man, he sought out situations that would expose him to the elements of society most of us are curious about but do not wish to experience directly. He frequented nightclubs and made paintings of strippers, pimps and prostitutes. Additionally, the worlds of wrestling and carnival sideshows provided inspiration for his work.

Never literal in his approach, Paschke often translated what he saw by creating composite images. In the tradition of Surrealism, which juxtaposes unlikely objects to create disturbing new meanings, Paschke admitted to being captivated by “incongruous things that would have shock value.”

Cobmaster is a performer, part male, part female, whose oversized grin, braided hair and sunglasses suggest racial stereotypes but whose brilliantly colored blue face immediately mocks those very stereotypes. Wearing a highly patterned costume and ruffled clown collar—perhaps a metaphor for the masquerade of role-playing—Cobmaster is set against a psychedelic-like background. In this outrageous, disquieting painting, Paschke acts as a social critic and powerfully confronts our assumptions about gender, sexual identity and race.