Home » About Elmhurst University » Our History

Elmhurst University traces its history back to 1871, when the German Evangelical Synod of the Northwest founded the Elmhurst Proseminary to prepare young men for theological seminary and to train teachers for parochial schools.

Fourteen students enrolled that first year. They studied music, mathematics, science, history, geography, religion, German and English—all disciplines that remain in the curriculum today—along with Latin and Greek. All courses, including English, were taught in German.

In 1924, the school formally took on the name Elmhurst College and began conferring the bachelor of arts degree. The first leader of the new four-year college was a 1912 alumnus, H. Richard Niebuhr, who went on to become one of the premier theologians of the 20th century.

Niebuhr, who envisioned Elmhurst as “an ever-widening circle,” undertook dramatic reforms. He built laboratories, hired a talented and progressive faculty, strengthened course offerings across the disciplines, and expanded library holdings. 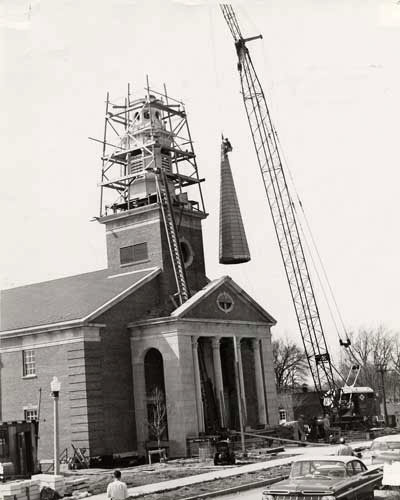 Hammerschmidt Memorial Chapel’s steeple is added during construction in 1959.

The circle continued to expand in the post-Niebuhr years.

Over the years, the University welcomed an extraordinary array of renowned speakers. In 1966, Martin Luther King Jr. spoke to a standing-room-only crowd in Hammerschmidt Memorial Chapel.

On July 1, 2020, the institution took the momentous step of officially changing its name to Elmhurst University. The university name more accurately reflects Elmhurst’s educational profile as a comprehensive higher education institution that offers programs in the liberal arts and applied sciences, while anticipating opportunities for new programs and partnerships.

As the University prepares to celebrate its sesquicentennial in 2021, U.S. News & World Report ranks it among the top 20 regional colleges in the Midwest as well as the region’s best values. Offering more than 70 majors and 20 master’s degree and graduate certificate programs, Elmhurst is deeply committed to helping students define their values, explore the world and prepare to reach their full potential—in college and in the world beyond.

Read More About the University