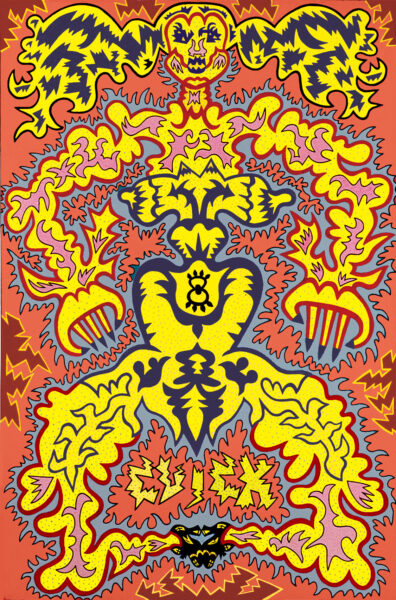 As a child, Karl Wirsum poured over comic books and wanted to become a cartoonist when he grew up. There is no doubt that his love of comic books and fascination with the ephemera of popular culture, i.e. mass-produced toys, objects from the carnival, and circus and cartoon worlds have developed his aesthetic. Moreover, his explorations of the visual forms produced by diverse cultures (Mayan and Aztec paintings and sculpture; Persian calligraphy; Native American art) have further stimulated his visual sense. Humor, verbal puns and the blues have each fueled his unique creativity.

In Click, Wirsum portrays a symmetrical, frontally viewed figure that he considers to have an iconic, timeless presence with an aura of impermanence. She is poised in midair with her gyrating shape rendered in a flat, highly patterned, starkly outlined style that suggests a direct reference to the world of comics. The word “click,” composed of written characters that appear to be charged with electricity, is framed by the figure’s lower anatomy and by her precisely painted tiny black high-heeled tap shoes.

According to the artist, this painting was inspired by the 1968 animated and live-action film spoof “Tappy Toes.” The film, created by artist Red Grooms, starred Wirsum’s wife, Lorri Gunn, in the role of a would-be actress about to get her big break. Even the exaggerated double ponytail hair-do in “Click” is a reference to his wife Lorri. 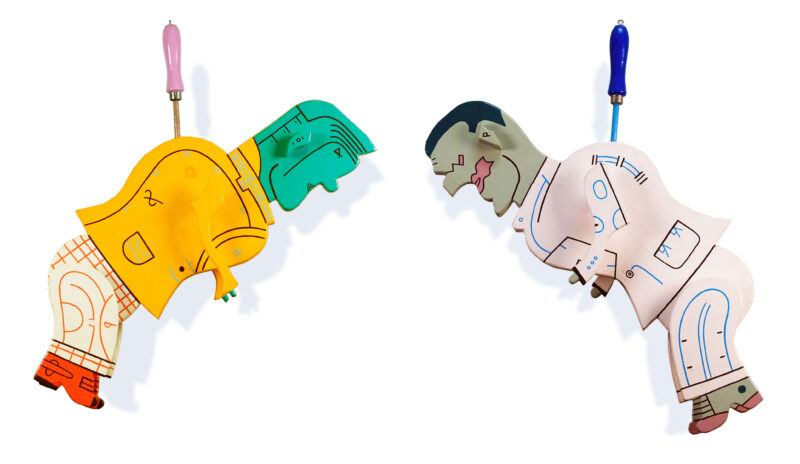