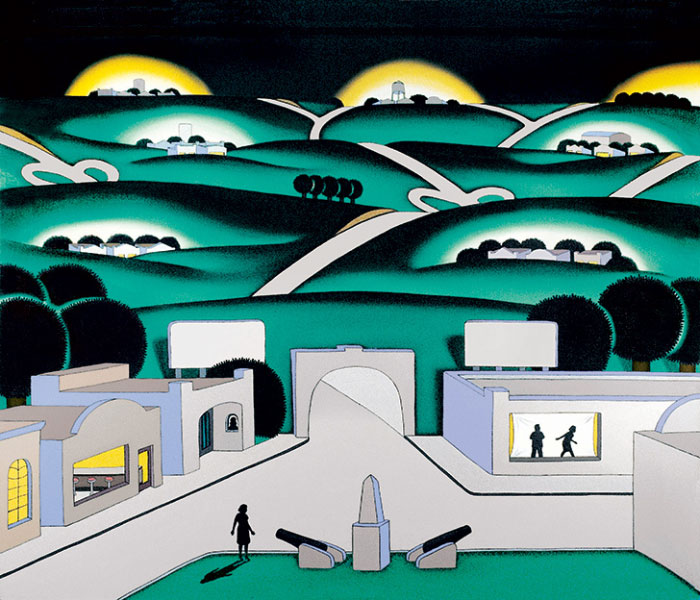 Chicago Imagist Roger Brown often recounted memories from his childhood in Alabama. He described traveling by car late at night after visiting relatives and seeing the glow of the lights from the numerous small towns they passed. Perhaps these early memories were an inspiration for the painting See Seven Cities.

As an adult Brown continued his travels, taking cross-country road trips around the United States. In the spirit of American artist Edward Hopper, whom he greatly admired, Brown’s travels provided a wealth of visual inspiration for his paintings. Brown developed a personal vocabulary of schematized forms to represent both the rural and urban landscape—influenced by his appreciation for the works of “self-taught artists.” Brown’s interest in popular culture is evident in the highly simplified cartoon-like forms and mini-sized silhouetted figures in his paintings.

See Seven Cities transports us far beyond memory and experience into a disturbingly dream-like space. Brown creates an extraordinarily mysterious scene composed of a hauntingly empty town square in which a drama is acted out. A few silhouetted figures inhabit this enigmatic scene: a disputatious couple viewed through a large picture window and a lone female confronting a cannon. Brown paints a tunnel leading from the town square to the green and glowing seven-cities landscape to offer an escape from this eerily dangerous place.