Troy D. VanAken, Ph.D., began his term as the 14th president of Elmhurst University in July 2016. Since his arrival, the University has seen historic enrollments and record fundraising results, while also achieving a notable increase in the student retention rate and a stable financial foundation on which to build.

With this positive momentum, President VanAken is focused on the future of the University. Under his leadership, Elmhurst College became Elmhurst University in July of 2020. This historic name change will more accurately describe what Elmhurst has become since its founding in 1871. And in 2021, Elmhurst will celebrate its 150th year of educating students and preparing them for meaningful lives and careers.

In anticipation of this anniversary, President VanAken engaged the entire campus community in developing a collaborative strategic plan. The Elmhurst University 2021 Strategic Plan serves as the blueprint for the future of the institution.

Earlier this year, President VanAken became the principal investigator for a $1.75 million National Science Foundation grant to improve success for underrepresented students in STEM fields at Elmhurst and at seven partner institutions.

This fall, the president established the President’s Advisory Council on Diversity, Equity and Inclusion to deepen the University’s efforts to enhance diversity on campus by consulting with other campus-wide committees and providing recommendations and best practices to the President’s Cabinet.

As part of Elmhurst’s goal to become a more global campus, President VanAken has led international recruitment efforts and serves on the advisory boards of educational institutions in Greece and Southeast Asia. He also is a professor of mathematics at Elmhurst, and has served on several NCAA committees.

Before coming to Elmhurst, he was president and professor of mathematics at Thiel College in Greenville, Pa. Among his accomplishments at Thiel, President VanAken oversaw a major capital campaign that exceeded its $60 million goal 10 months early.

He holds master’s and doctoral degrees in mathematics from Bowling Green State University and a bachelor of science degree from Hillsdale College. President VanAken and his wife, Dr. Annette VanAken, have two adult children, Trey and Gabriella. 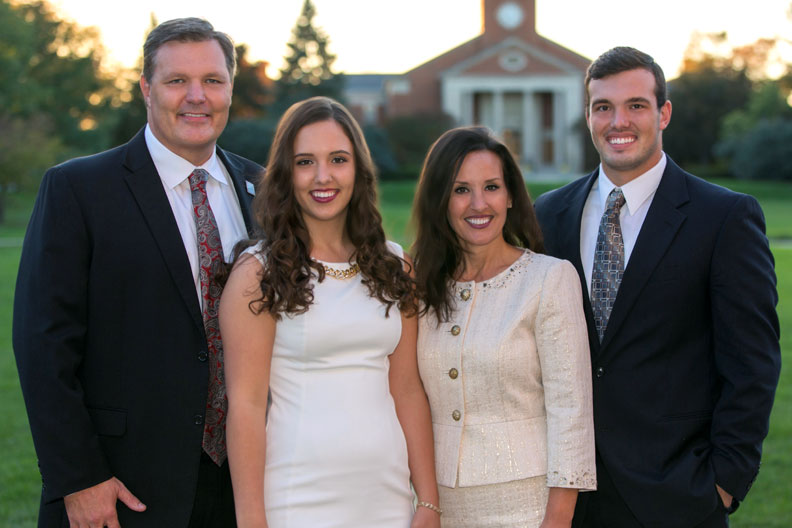 The VanAken family (L to R): Troy, Gabriella, Annette and Trey after the Inauguration Ceremony in October 2016