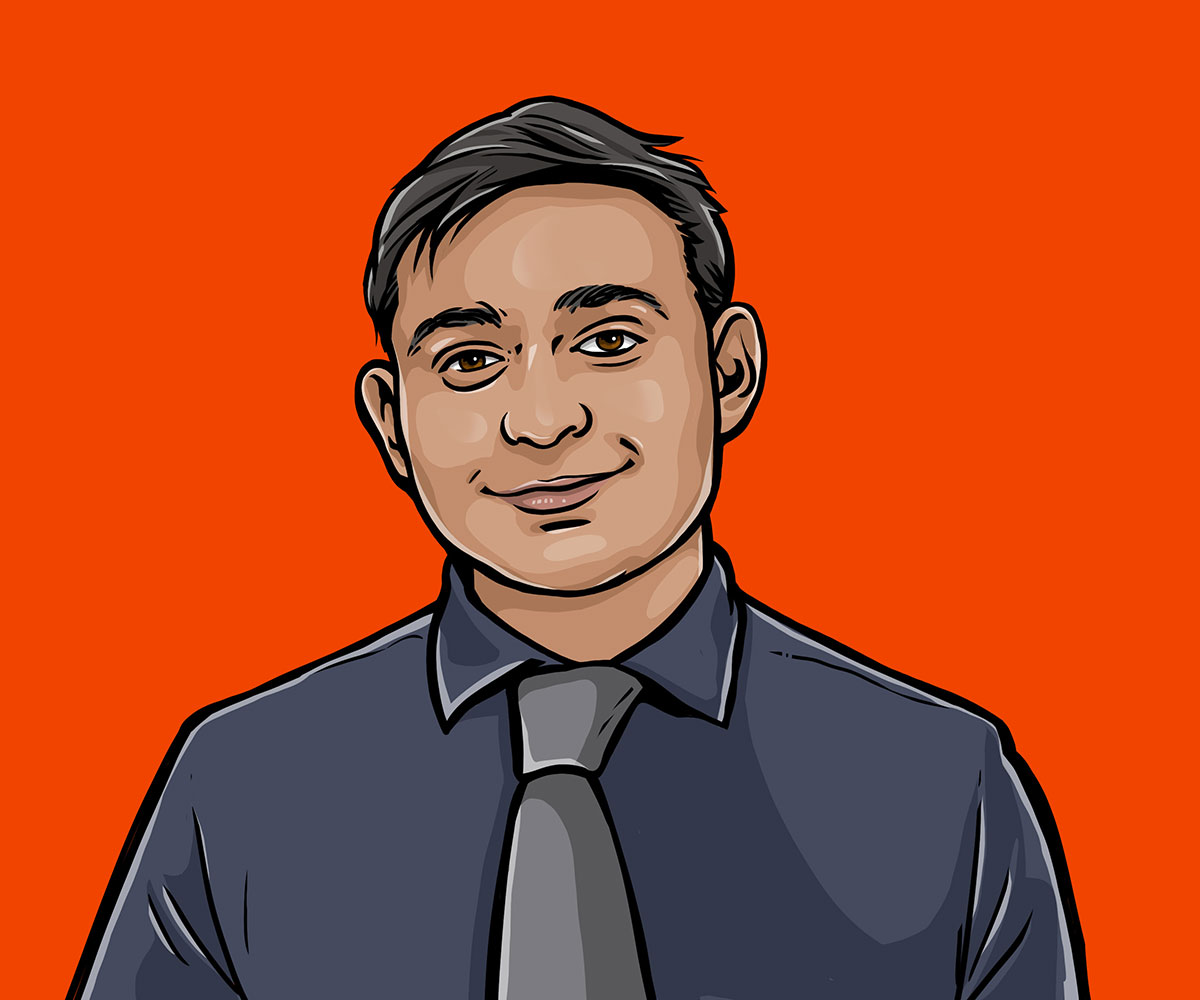 “I think that’s my purpose in life, to serve others.” —Dennis Arreaza ’23

For Dennis Arreaza ’23, the road to Elmhurst began when he was just 11 years old—on a dusty, gravel-strewn makeshift soccer pitch.

Born in Chicago, Dennis moved with his family to suburban Northlake when he was 8 years old. Although he grew up in the Midwest, his parents—who immigrated to the U.S. from their native Guatemala—wanted him and his brother to know their roots.

“My dad has taken us on trips to Guatemala ever since I was little,” Dennis says. “He wanted us to grow up knowing that people there are struggling, and for us to understand that we’re fortunate for what we have.”

His father taught him that “you have to lend a hand to help those who need it.”

That’s a lesson Dennis takes to heart as he enters Elmhurst University as a first-year student this fall—and as the first-place winner of the inaugural Niebuhr Service to Society Scholarship competition.

In his video application for the four-year, full-tuition award, Dennis highlighted his ongoing project in the village of Zacapa, Guatemala, where he organized a youth soccer team.

On his first trip to Guatemala, Dennis—then a sixth-grader—saw kids playing soccer barefoot, “running on rocks and with cuts on their feet,” he says, adding that his dad grew up playing that way, too.

The image inspired him to help those kids, starting from the ground up.

“I went to garage sales and asked people for donations for soccer cleats, balls, or whatever I could find,” Dennis says. Then he distributed the equipment to the kids in Zacapa.

The long-term plan, he says, is to prevent kids from getting involved in crime.

“In Central American countries, gangs start recruiting kids at a very early age. To prevent that, I thought maybe these kids could play soccer. There’s an inadequate number of parks. Schools are underfunded. There’s really not much to keep kids entertained. Sports can keep kids at a distance from violent crime.”

Dennis knows firsthand how athletics can provide crucial life skills. “You learn values that are instilled in you for a long time: discipline, teamwork and a strong work ethic.”

He started playing soccer himself when he was 8. “My dad signed me up. But I didn’t want to go at first,” he says. “I was into skateboarding. But I ended up liking it.”

He liked it so much that by the time he was a teenager, he joined a travel team that trained for more than two hours per day, six days a week. At 15, his team toured Europe, playing in Austria, Italy, Croatia and Slovenia.

Though he left the travel team in his junior year so he could focus more on academics, he kept playing for his high school—and sending soccer equipment to Guatemala. Meanwhile, he got involved in service projects closer to home, including the Spanish Honor Society, which led to him visiting residents at a local retirement home. He also helped raise money for the victims of Hurricane Maria in Puerto Rico.

When it came time to choose a college, Dennis knew Elmhurst would be a good fit. Because he lives nearby, he’d already visited campus a few times. And since he wanted to commute, its proximity to home was a big factor. But most of all, he was looking for a place where he could excel in his intended major, nursing.

“Elmhurst has a really solid nursing program, and I like the small-school environment that it offers,” he says. “Since there are fewer students in classrooms, I think I’ll get more attention and can build more connections with [my] teachers.”

Dennis has always had an affinity for science classes, he says: “I love chemistry and biology. But I also chose nursing because I really enjoy helping people. I think that’s my purpose in life, to serve others.”

When he learned about the Niebuhr Scholarship, Dennis knew he wanted to apply, and needed to find a way to stand out.

“I thought that if I recorded my video at home, no one would believe me,” he says. He didn’t have many pictures from previous trips. “I’d just been doing this from my heart, not expecting anything back from it or attention from anyone.”

On December 30, 2018, Dennis told his parents that he wanted to go to Guatemala and document his efforts for the three-minute application video on his own. They agreed. “We bought a flight and I flew out January 2,” he says. “Everything was super quick.”

Though he says it wasn’t easy to fly to another country by himself, it was all worthwhile, and not just because his video won him the scholarship. He was able to provide even more kids with hope, empowerment and a sense of belonging amid a difficult backdrop. 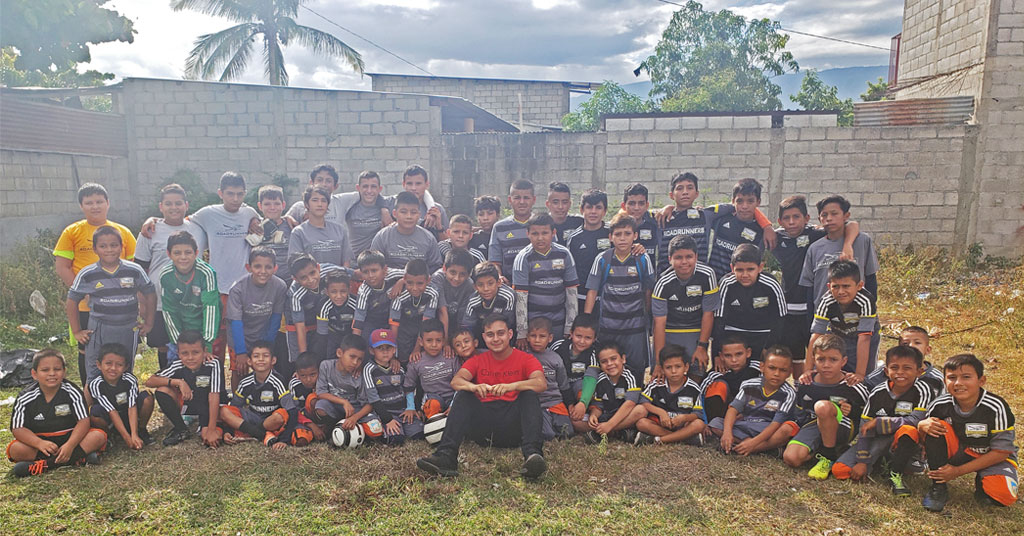 “I really do love going there,” Dennis says of Guatemala. “I love the country—the culture, the hospitality of the people, the weather. There are so many beautiful places … waterfalls, mountains, the jungle. It was really eye-opening for me, having grown up in the city. I got to see the crater of a water volcano.”

Since Dennis posted his scholarship-winning video in January, it’s gotten more than 2,700 views on YouTube and kicked off a flurry of support.

“People have been reaching out to me, and I’m getting tons of help … from all over,” he says. In fact, he’s preparing for an upcoming trip to distribute more equipment than ever, thanks to generous donations. He already shipped a box with 80 pairs of cleats, 120 uniforms and dozens of training tops, dry-fit jerseys, socks, shin guards and soccer balls.

This time, he promises, he’ll take plenty of pictures.