March 12, 2019 | by the Office of Marketing and Communications 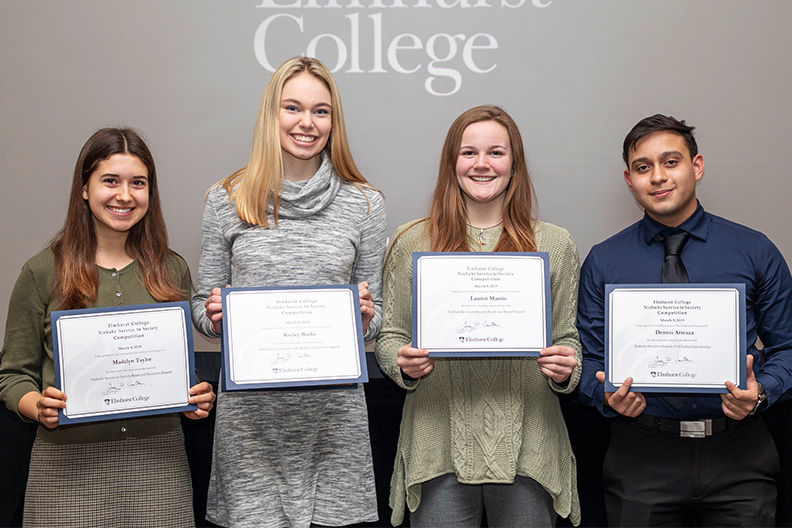 Dennis Arreaza, who started a youth soccer team in a Guatemalan village to keep the kids away from gangs and drugs, is the first-place winner of Elmhurst College’s inaugural Niebuhr Service to Society Scholarship Competition.

During an awards ceremony on Saturday, March 9, Arreaza, a senior at West Leyden High School in Northlake, was awarded a four-year, full-tuition scholarship to attend Elmhurst.

The College launched the Niebuhr Service to Society Scholarship Competition last fall to recognize and reward prospective Elmhurst students with a significant interest in service, both as an aspect of their college search process and in their life beyond college.

In his contest application, Arreaza, of Melrose Park, listed a variety of service activities, from raising money for hurricane victims in Puerto Rico to making beds in a Chicago homeless shelter. But the video he submitted to the contest focused on his efforts to promote youth soccer in Zacapa, Guatemala, “to keep kids distant from criminal activity; and to empower communities and give the kids living there a sense of belonging.”

Lauren Mastio, a St. Charles North High School student, was the second-prize winner of the Niebuhr competition. She was awarded a stipend to cover four years of room and board at Elmhurst. Two other students—Kayley Burke, who attends Evergreen Park Community High School; and Madelyn Taylor, who attends Saint Francis High School, in Cedar, Mich.—were awarded stipends to cover all of their book and materials expenses. In addition, each of the 150 students who entered the contest received a $1,000 Niebuhr Grant, which can be added to previously awarded merit scholarships and/or grants.

The Niebuhr Service to Society Scholarship Competition is named for theologians Reinhold and H. Richard Niebuhr, two of Elmhurst College’s most esteemed alumni. Grounded in the College’s core values of community, social responsibility and stewardship, the College sought students motivated to transform their communities in line with the teachings of the Niebuhr brothers.

“You are here because you are motivated by the desire to make a difference in your community, and in the lives of others,” President Troy D. VanAken said during the awards ceremony. “We too believe in changing lives through the power of education. Should you choose to attend Elmhurst College, you will be in an environment that will prepare and inspire you to do even more that you can share with the world.”