Will Lyles represents Elmhurst spirit—on and off the court. 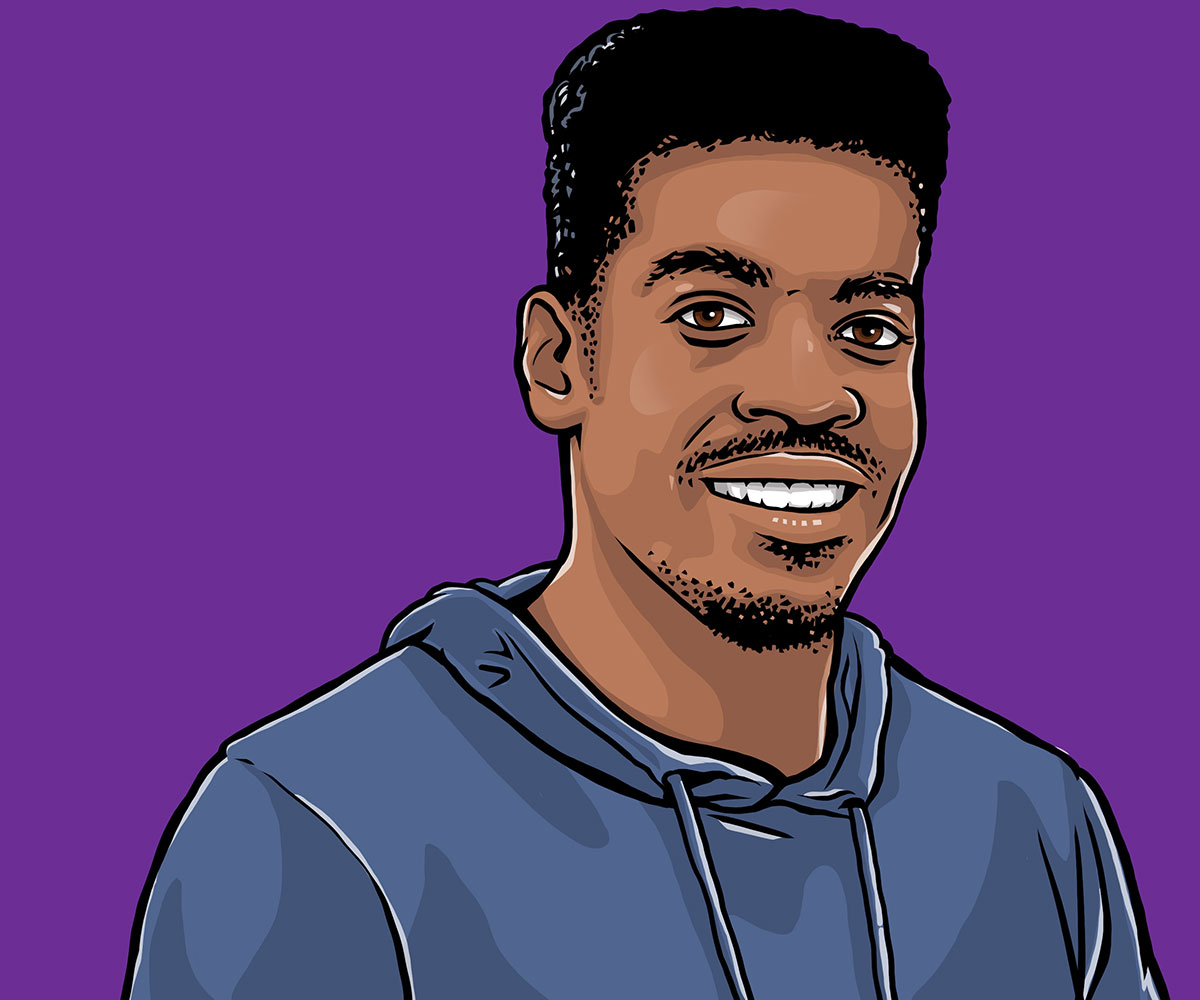 “A little bit of kindness goes a long way, and I feel like that’s what we’re about as a community.” —Will Lyles ’20

Will Lyles ’20 grew up in Berkeley, Illinois, about 10 minutes away from Elmhurst University. But his Bluejay experience has already taken him across the Midwest, the nation and even the Atlantic Ocean.

The Bluejays played two games against European Division II teams. “We ended up winning one and losing one,” says Will. “It was a good experience because we had to adapt. The rules of basketball in Spain differ so much from the U.S. It was a challenge for us, but it’s nice knowing both sides of the spectrum and seeing how two different cultures handle a sport.”

Back in the states, Will spent one of his spring breaks in Taos, New Mexico, where he helped to build an adobe house with the Elmhurst chapter of Habitat for Humanity. “That was one of the best things I’ve done so far, experiential learning,” he says. “Having an opportunity like that, to go somewhere with a good group of people and make a difference—that’s rare. I’m all about helping out and making people happy.”

For Will, Elmhurst is a place that shares his values. “A little bit of kindness goes a long way, and I feel like that’s what we’re about as a community,” says Will.

As the school year begins, Will is looking forward to new opportunities and new friends. Even though his family is just a few miles away, he loves living on campus.

“I wanted to really live the college life. And being on campus is a big part of it,” he says. “I have so many friends, and I bet this semester, I’ll make even more. For me, it’s about connecting with people.”

Coming Through in the Clutch

An information systems major, Will has loved working with technology ever since he was a kid. “I fixed my dad’s computer when I was, like, 11,” he says.

In his classes at Elmhurst, he’s learning to build custom systems that can maximize efficiency, user experience and security for all kinds of organizations.

“To better an organization, or the experience for its customers, by using my creativity …  it’s just magnificent to me,” says Will, who’s planning to enter the cyber security field after graduation.

The IS track is a challenging one, he admits. “The classes are … well, they’re no joke.” Case in point: calculus.

“I would say I’m pretty good at math, so I came into that class thinking ‘This shouldn’t be that bad.’”

“Calc hit me with the bamboozle,” Will says with a laugh. “I had to push myself to get a better grasp on it. But I never felt like I was alone.”

Will credits Elmhurst’s small classes and individualized attention from instructors as being vital to surviving—and thriving—in calculus and beyond.

“My calc professor helped me out every time. She was always more than willing to answer my questions. I ended up doing really well in that class because I had her on my side.” 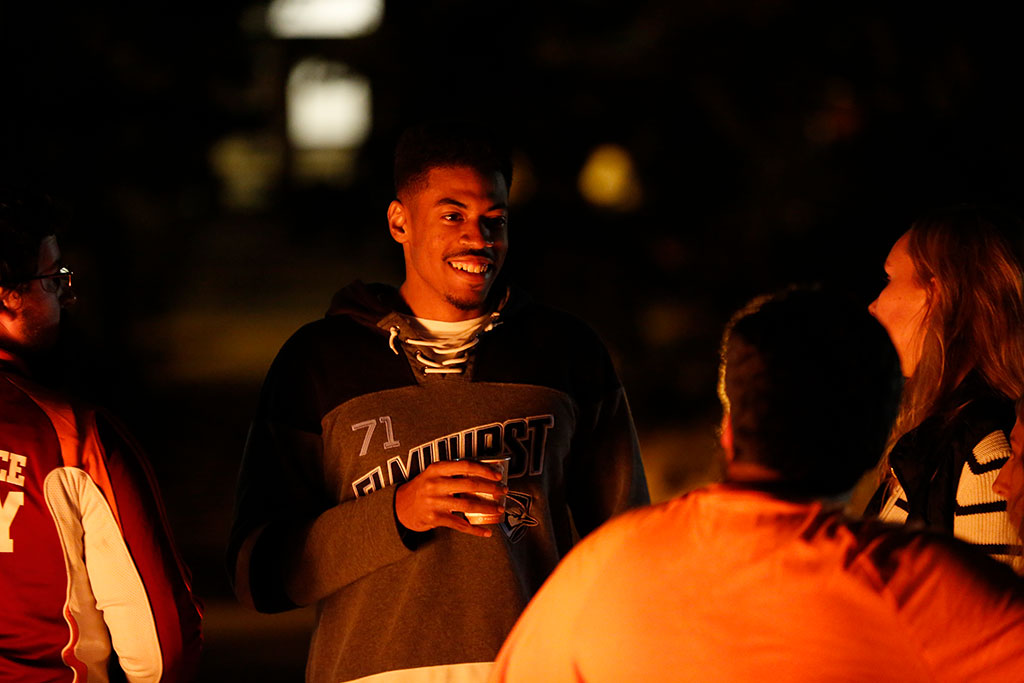 Will Lyles enjoys Elmhurst’s caring atmosphere and sense of community.

Across the board, Will’s professors and coaches have been a consistent source of support.

“It doesn’t even have to be class-related,” he says. “I took an intro to Judaism class for my religion requirement. My professor Andrea Cosnowsky and I still email each other. ‘What’s up, Rabbi?’ I can talk to her about anything. I do that with my IS professors, too. And the coaching staff—they’re the same way.

“I feel welcome. Everybody wants to see me succeed. I feel like that’s just so special to this University.”

Will, a forward on the basketball team, is looking forward to his final Bluejay season come November.

“Over the last few years, we didn’t get where we wanted to be,” he says. “Of course, we want to win the CCIW tournament. Last season, we got knocked out by Wheaton in the first game. That was a little disappointing. But just being able to get there was a big accomplishment.”

And, he adds: “Watching us grow as a team has been really special. I’m starting to evolve as a player. I feel like this upcoming season, we’ll see a big difference.”

Basketball is more than a game, says Will. “We’ll have a workout before practice. Then we’ll practice and lift weights after practice. That’s at least three days a week, even on Saturdays sometimes. We really go at it. It teaches you hard work, discipline, how to grow as a person—and how to manage my time. I can thank basketball for that.”

It wasn’t always easy, he says.

“Freshman year, I did not manage my time well. I’d often be kind of frantic. Now, I’m way better about it. I have a planner, and I write everything down. I even write myself notes like, ‘OK, I know you want to go play Frisbee on the Mall, but you’ve got to get this done first.’ Having priorities and a set plan really helps. Things get much easier when you’re prepared.”

Gearing up for his senior year, Will has some hard-won advice for incoming students.

“If you want to excel at something, whether it’s a sport or in the classroom, you really have to put the time in. You’ve got to give it 100 percent. There’s no 90 or 95 percent. Just completely invest yourself in it, and good things will come your way.”