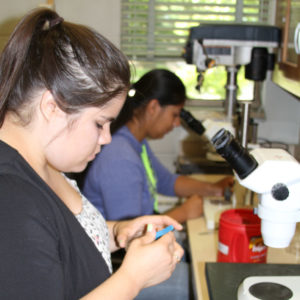 Fishing for microfossils in a petri dish of 60 million-year-old sediment from North Dakota was at first daunting for rising second-year students Karla Gomez ’20 and Mariela Salgado ’20. It took about a week for the pair to get comfortable spotting fragments of fish vertebrae, crocodile teeth and turtle shells. “In the beginning we were so excited to find them,” Gomez recalled. “Then there were so many—it was just another one, then another one.”

Working on a research project with biology professor Merrilee Guenther, the students found and archived hundreds of specimens. Their mission: use the microfossils to reconstruct the local environment at the time. It turns out that the sediment was full of water-bound creatures, suggesting that this area of the northern Great Plains was aquatic. “That was an aha moment,” the students said. “There were so many fish.”

This September, Gomez and Salgado will present their findings at The Keystone Summer Research Poster Session in the Frick Center, along with other Elmhurst students who conducted summer projects.

“I used to read the encyclopedia for fun and animals always fascinated me,” she said. The students received stipends for their research under The Keystone Program, a National Science Foundation supported program aimed at supporting STEM student success in the first year.