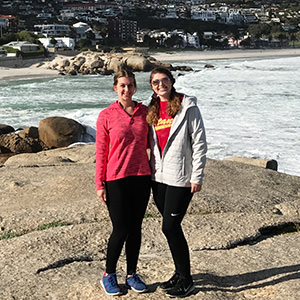 Molly Brennan ’19 recalls being impressed when she learned that her friend’s sister was an engineer building an irrigation system in South Africa. “I realized that I didn’t have to be a doctor to help people,” she said. “I could be an engineer.”

Brennan helped young students in Cape Town as part of an Elmhurst College service-learning course, South Africa Service and Interdisciplinary Study. The students were assigned either to a preschool or elementary school for 10 days, or worked with the Mustadafin Foundation, a community organization that deals with humanitarian and social issues. The trip concluded with a visit to a wildlife preserve.

Brennan and Rebecca Blaufuss ’18 each did an extra project to earn Honors credit.

Blaufuss, an elementary education major from Cleveland, Ohio, wrote a paper comparing South African and U.S. schools in the methods and standards used to teach math. “I [was] interested in getting exposure to another country’s education system,” she said.

Brennan, a computer science major who grew up in Chicago suburb of Tinley Park, planned a project on the history of South Africa’s music culture. She was inspired by education professor Therese Wehman, one of three faculty members who led the trip.

“This is once in a lifetime, an experience that will change your life,” she recalled Wehman saying. “I had a gut feeling that I needed to do this.”