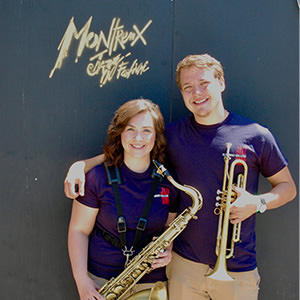 “Ryan had conducted two concerts with us and Dee Dee was a headliner at the [February] Jazz Festival, so we already had a connection,” she said. “It was a ton of fun.”

The band also performed at the Montreux Jazz Festival in Montreux, Switzerland; the Vienne Jazz Festival near Lyon, France; and other smaller venues.

It was the second European tour for Bandera, a major in saxophone performance and music education from Oak Lawn, Illinois. “It was cool to explore new locations and revisit old ones,” she said. Bandera began playing clarinet in fourth grade and sax in middle school. Professionally, she plans to teach younger students and continue performing.

For trumpeter Adam Roebuck, the trip was bittersweet since he recently graduated. Roebuck, a major in jazz studies and music business from Columbia, Missouri, started trumpet in the sixth grade. He plans to teach as well as write and perform his own music.

“It’s amazing having the opportunity to play at some of the world’s most renowned music festivals,” Roebuck said. “Concert attendees, as well as other performers, always are impressed to hear a big band comprised of such young musicians performing at such a high level.”