Home » News » Alumna Writes a Story of Empowerment for Kids

Alumna Writes a Story of Empowerment for Kids

July 9, 2015 | by the Office of Marketing and Communications 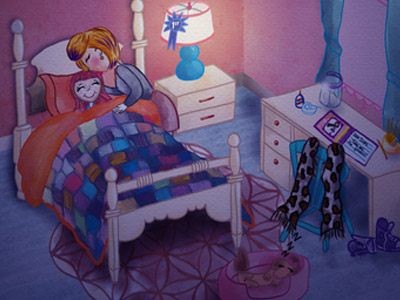 When Amy Logan ’94 arrives at one of the dozens of schools she visits each year, she is often greeted by bunches of excited students in leopard-print scarves.

The distinctive fashion statement is a tribute to the hero of Logan’s debut children’s book, A Girl With a Cape, the story of a girl who likes to believe that her leopard-print scarf is really a superhero’s cape that gives her the power to change the world.

Since it appeared in 2013, Logan’s self-published book has found an enthusiastic audience among younger grade-schoolers and their parents. Logan has printed 22,000 copies of the book, each of which comes with its own kid-sized leopard-print cape. Logan says that parents tell her their children insist on wearing their capes during nightly story-time readings of the book.

“I get so many photos from parents of their kids wearing their capes,” Logan said. “And I get the most wonderful letters and emails from children. It’s so nice to hear that the books has made a difference with them.”

Logan said she was inspired to write the book in part by her own quest to make a positive difference in the world. After graduating from Elmhurst with a major in speech-language pathology and earning a master’s degree in education from Aurora University, Logan went to work in direct sales, training and mentoring other women in the field.

But she never forgot her longtime aspiration to write for children.

“I was asking myself, ‘Am I really making a difference with my life?’” she said. “I wanted kids to know that you don’t have to be affluent or powerful to make the world a better place. Anyone can make a difference.”

After researching a variety of publishing platforms, she decided to launch the book under her own publishing company, Full Heart Books.

“I knew that no one was going to do a better job marketing the book than we would,” she said.

She takes the book’s message of empowerment directly to young readers, with visits to schools, hospitals and women’s groups. She encourages schools to plan Kindness-a-Thons to coincide with her visit, with students urged to practice courtesies such as sharing, listening and helping others. Her website invites visitors to sign a Rock the Cape pledge to “Create a Positive Environment wherever I go.”

Logan, who is married with two school-age children, has since written a follow-up, A Girl With a Cape and Her Jar of Pennies, and is preparing to release a third book in the series, A Girl With a Pink Cape, in October. All are available on her website and at Amazon.com.

Logan says her experiences as an author confirm the lesson her cape-wearing hero learns in her books.

“We all can do so much more than we think,” she said. “Everyone can have an impact.”