February 12, 2021 | by the Office of Marketing and Communications 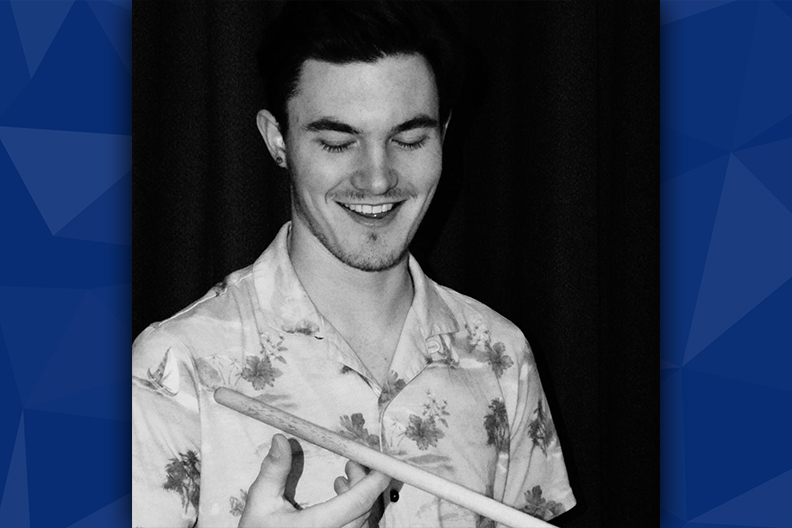 Most students would be happy to know their final project impressed their professor and earned a passing grade. Tommy Kelliher’s final project for a digital music class accomplished that and so much more, becoming the score for an international short film.

The final project in assistant music professor Mike Pinto’s Digital Music I class is for students to compose a film score. This past Fall Term, he reached out to various directors who had submitted entries to the Filminute festival, which celebrates minute-long films. Pinto assigned his students to compose a score for one of three films from the festival.

When assigning the final project, Pinto gives students wide creative latitude, telling them simply to do what the film requires. After just one viewing of the stop-motion film Busker, Kelliher said he had a good feel for the overall tone of his score. He then watched it multiple times, taking notes along the way, to determine specifics such as tempo, flow, instrumentation and sound effects.

“Tommy just did a very good job of interpreting the emotional arc of the story and not only mirroring it in his music, but actually amplifying it to make the story and the emotions even stronger than they would be without the music—which should be the goal of any good film score,” Pinto said.

Pinto shared all of the finished scores with the directors. Busker director Trevor Hardy, of the United Kingdom-based Pigbird stop-motion studio, preferred Kelliher’s score to the original and asked to use it. Kelliher even gets a credit on the new version of the film, which tells the story of a musician trying to entertain passersby and earn some money at the same time.

“I never expected the director to be so impressed as to actually use my music for his film,” said Kelliher ’20, who graduated in December with a bachelor’s degree in jazz studies. “I’m just grateful, and I was glad to have the opportunity to express my thanks to the director for his appreciation of my work.”

Although the music industry as a whole is largely on hold during the pandemic, Kelliher’s passion to pursue a music career has not suffered. He envisions himself eventually becoming a performer, composer or educator, but in the meantime his experience with Busker has piqued his interest.

“It feels good to know that composing is a safe and fulfilling creative outlet that I can explore while I have this time when performing is impractical,” he said. “I’m curious to see how I could compose if I were involved in the process earlier on.”