May 14, 2012 | by the Office of Marketing and Communications 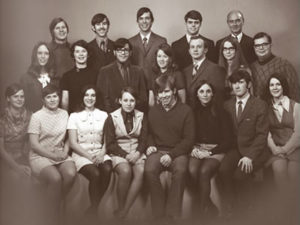 This fall, Elmhurst College’s Mill Theatre will debut not only The 25th Annual Putnam County Spelling Bee but also an expansive new lobby, plush theatre seats, and big, new restrooms that won’t have to be shared with the cast and crew.

The extensive renovations to the Mill Theatre, which will get under way later this month, are possible because of a $250,000 gift from alumna Meredith Wollenberg Morrison, Class of 1972 and a longtime supporter of the College’s theatre program.

“I am so grateful for the continued support Meredy has shown Elmhurst College over the years, especially to its theatre program,” said President S. Alan Ray. “Her wonderful generosity gives us an opportunity to make critical improvements that increase accessibility and enhance the theatre experience on our campus.”

The most dramatic changes will be in the lobby, which will be completely remodeled. The resulting space will be nearly twice as large, and will include a permanent box office. Two sets of entrance doors will enhance traffic flow between the lobby and the theatre.

Just off the lobby will be the new restrooms, which should come as a welcome change. The old ones were hard to find, inaccessible to patrons who use wheelchairs and walkers, and had to be shared with the cast and crew.

Inside the theatre, the seating will be refurbished and more than a dozen new seats added, bringing the total number to 180. The theatre also will get a new lighting booth.

The renovation will take place over the summer, and should be move-in ready by early August.

“For people who’ve been here year after year, this will be a huge change,” said theatre professor and department chair Alan Weiger.

Morrison’s gift, through The Wollenberg Foundation, follows a $50,000 donation made to the Mill in 2009 that paid for a new stage, a new ventilation system and ceiling fans, and upgrades to the costume shop.

A theatre and sociology major when she attended Elmhurst, Morrison was an active participant in the theatre program’s Chancel Players and a member of its theatre recognition society, Theta Alpha Phi.

“Providing this gift to Elmhurst makes it possible for the College to upgrade the Mill in significant, visible ways,” she said. “It’s very gratifying to know I’m making a difference.”