February 4, 2016 | by the Office of Marketing and Communications 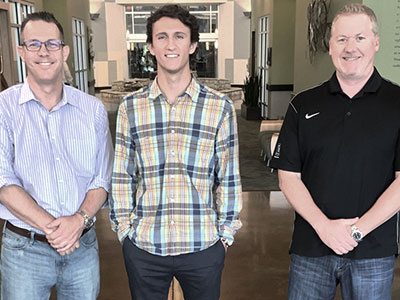 The sophomore international business major split his 10-week internship last summer between Permobil’s offices in Nashville, Tennessee, and Timrå, Sweden, about three hours from the Stockholm suburb where he had lived for four years as a boy. The job took Wetherby Jonsson more than 4,000 miles from the Elmhurst campus, but the long trip was a familiar one for him. He had been flying back and forth between Sweden and the United States to visit family several times a year since he was in middle school.

“I feel like I could walk to the gate at O’Hare in my sleep by now,” he said of his frequent travels.

But if traveling abroad was nearly routine for Wetherby Jonsson, his internship offered plenty of new experiences. He spent time in nearly every area of the company’s offices, from marketing to the warehouse, and from the call center to the chief executive’s office. He sat in on strategy-setting meetings with the company’s leadership—but only after signing an agreement not to disclose the topics of conversation.

“They do some extraordinary things, and it really opened my eyes to all the different areas of a company like this,” he said. “It was like International Business 101.”

Wetherby Jonsson said his favorite department was research and development, where the company works on advances in the technologies that guide their products. “It was the coolest thing,” he said. “They’re working on some pretty advanced, futuristic stuff there, and it was fascinating to get a look at it.”

Wetherby Jonsson’s interest in international business was fueled in part by his bi-continental upbringing. After spending his grade-school years in Sweden, where his mother’s family still lives, he and his family moved to Los Angeles, where he attended middle school and high school. As a boy he noticed subtle differences between the two places he had called home. Parents in California, for example, were less likely to let their children roam the neighborhood independently than those in suburban Stockholm.

“Growing up in two different places has had a huge impact on me,” he said. “I think I’m comfortable with differences and open to new things because of it.”

As an intern at Permobil, he also noted slight differences in the office cultures in Sweden and in the U.S. His coworkers in Nashville interacted more informally and were more likely to hang out together after work; in Sweden, the workplace was a little more regimented and the line between work and social life was more clearly drawn.

Wetherby Jonsson hopes to have more first-hand experiences in international business. Permobil has already offered him a second internship, and he hopes to spend part of next year studying and working in Shanghai. He is working with the staff at Elmhurst’s Center for Professional Excellence to make arrangements.

“It’s great to be able to study international business and to live it, too,” he said.