September 5, 2014 | by the Office of Marketing and Communications 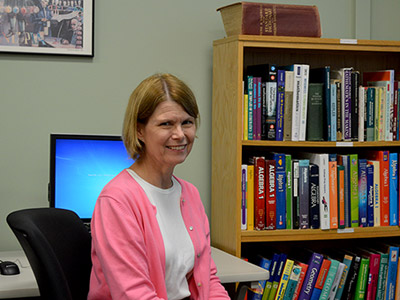 Susan Brown ’76 recently received the 2014 T.E. Rine Secondary Mathematics Teaching Award from the Illinois Council of Teachers of Mathematics in recognition of her work as a mathematics educator and leader in the field.

Brown is the math department coordinator at Elmhurst’s York High School, where she has taught for 27 years. She also has served as president of the Chicago Metropolitan Mathematics Club and a board member of the Illinois Council of Teachers of Mathematics. She was a major contributor to the University of Chicago School Mathematics Project, which helped develop math curriculum and texts used throughout the country.

A math education major at Elmhurst, Brown says her time at the College was instrumental to her success as a teacher and counts Frank Allen, the head of the mathematics department at the time, among her mentors. “He was a part of the ‘new math’ movement,” she recalls. “He made sure his students were really engaged in the changes that were happening throughout the country.”

Brown’s passion for the complexity of math and her ability to show students the big picture distinguish her as an educator.

“One of Sue’s significant strengths as a teacher is her focus on the importance of students making connections and developing a deep understanding of the concepts,” explains Rebecca Keller, math/science division chair at York High School, who was one of two coworkers to nominate Brown for the award.

Brown has had a tremendous impact on the department’s curriculum as well, according to Keller. “She has created numerous activities and projects, both hands-on and technological, which help students to discover ideas, to cement their understanding and to make connections.”

Elmhurst College Professor of Mathematics Jon Johnson saw this in action in the early 1990s, when he worked with Brown on a National Science Foundation–funded project to integrate technology into the classroom. “She had a lot of knowledge about how technology could be used, and how to do so creatively,” he says. “She really guided York’s math department into the 21st century.”

Johnson teaches many of Brown’s former students in his classes and often hears great things about her ability to teach complex concepts in an understandable way.

Brown considers that “light bulb moment” to be the heart of teaching. “In so many schools, it’s just about remembering,” she notes. “In my classroom at York, it’s about actually understanding it.”