September 18, 2015 | by the Office of Marketing and Communications 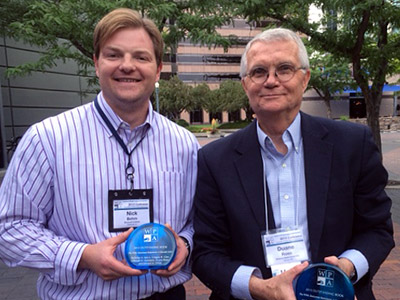 A book co-edited by Nicholas Behm, associate professor in the Department of English, has won a prestigious award from a national professional organization.

The WPA Outcomes Statement: A Decade Later was honored by the Council of Writing Program Administrators (CWPA) with a 2015 “Best Book Award.” Behm and his fellow co-editors were recognized at the Council’s annual conference in Boise, Idaho, in July.

“Nick was the lead editor of this influential collection,” says Tina Kazan, associate professor in the College’s English department. “A best book award from a national association signals that he is doing exceptional scholarship. This is a rare honor for a scholar in any field.”

The book is a collection of essays examining the WPA Outcomes Statement, a document approved by the CWPA in 2000 that has helped to shape first-year writing programs in colleges and universities across the United States.

In its announcement of the award, the CWPA awards committee praised The WPA Outcomes Statement: A Decade Later for the “breadth and depth of the contributions,” saying, “This book will be a useful resource for years to come. It’s not only a retrospective, but a forward-looking work that provides ideas for institutions at all levels.”

The primary audience for the book is composition and rhetoric scholars and writing program administrators, but Behm says the editors also hope to reach a wider audience.

“The outcomes statement is inherently political, because it significantly informs not only curricula for writing programs, but also writing assessment practices, which ultimately affect students’ educational experiences and influence the appropriation of resources,” Behm notes. “So the statement, and what people have to say about it, should be of interest to college administrators, politicians and government officials as well as to scholars of writing.

“Winning the prize was a strong affirmation of the quality of the chapters within the text,” Behm adds. “I’m happy about the contribution the book is making in moving the conversation forward.”