December 18, 2018 | by the Office of Marketing and Communications 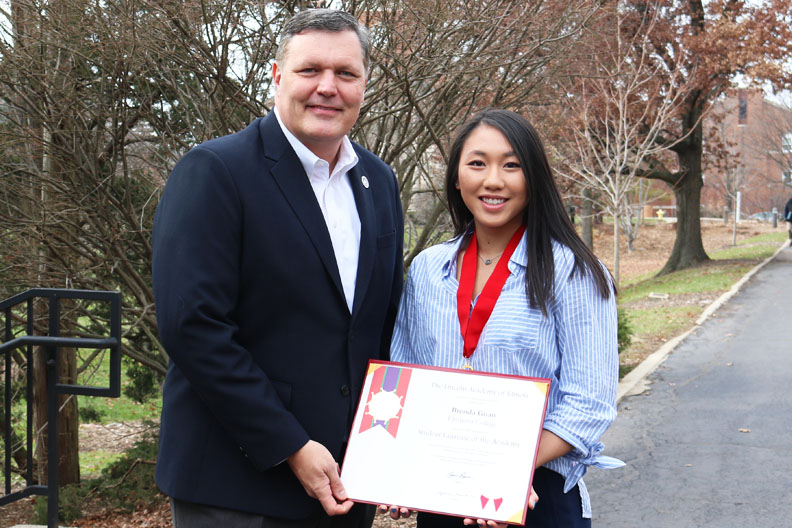 Brenda Guan, a senior majoring in exercise science, has been named the Elmhurst College 2018 recipient of the Abraham Lincoln Civic Engagement and Student Laureate Award.

Accompanied by her family, Guan received the award on Nov. 17 during the 44th Annual Convocation and Investiture of Student Laureates at the Old State Capitol in Springfield. Guan said she was very surprised to have won the award—she didn’t know she had even been nominated—and was delighted that her parents could attend the ceremony with her.

“I’d never seen them so proud, so happy,” said Guan, a first-generation college student from Skokie whose parents emigrated to the U.S. from China. “I didn’t think of myself as having done anything that prestigious, but I’m very proud and appreciative.”

Each fall, an outstanding senior from each of the four-year degree-granting institutions of higher learning in Illinois is presented with the Abraham Lincoln Civic Engagement Award, becoming a student laureate of The Lincoln Academy of Illinois. In the spirit of Lincoln, student laureates are honored for their leadership and service in the pursuit of the betterment of humanity, and for overall excellence in curricular and extracurricular activities. Since the program’s inception in 1975, more than 2,000 students have received the honor.

Nominated for the award by Professor of Kinesiology Charles Goehl, Guan plans to pursue a doctorate in physical therapy after she graduates. She currently is interning as a therapy aide at a physical therapy clinic, and also has interned at Easter Seals as an aquatic therapy aide. At Elmhurst, she participated in the Food Recovery Network, tutored at the Learning Center, serves on the executive board for Aspiring Rehabilitation Club and is vice president of risk management for her sorority.