February 4, 2015 | by the Office of Marketing and Communications 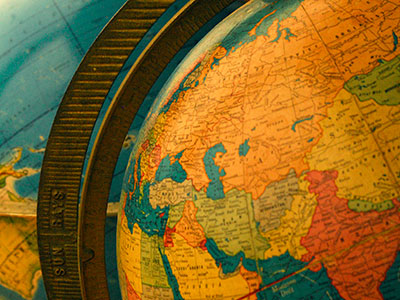 With Syria enduring the fourth year of a devastating civil war that has riven the country along sectarian lines, a group of Syrian religious scholars and leaders representing that country’s many faith communities came to Elmhurst on November 1 to discuss religion’s role in shaping Syria’s future.

In an event titled “Faith and Reconciliation: A Way Forward,” representatives of Sunni, Kurd, Christian, Alawi and other groups debated how Syria can emerge from years of strife and what a new, democratic Syria might look like.

The discussion in Elmhurst’s Schaible Science Center was organized by the U.S. State Department and co-hosted by Elmhurst’s Niebuhr Center for Faith and Action and the Syrian American Council. About 100 people, many of them from the local Syrian American community, attended the event, one of several appearances the group of religious leaders made around the U.S. in the fall.

One of the central points of debate was whether a new Syria should be a secular or religious state.

“All agreed that there needs to be a democratic Syria,” said Inamul Haq, program coordinator at the Niebuhr Center. “But for some, religion has to play a greater role, while others want religion completely out of politics. That was the main point of contention: a secular Syria or a more Islamic Syria.”

The unrest in Syria grew out of protests against the regime of President Bashar al-Assad in 2011. Those protests were part of the Arab Spring, a series of popular uprisings that inspired hope for a wave of democratization across the Arab world. But Syria, where the regime has held onto power, has descended into violence that has spiraled into a regional crisis. The U.N. estimates that 200,000 people have been killed in the conflict. Eleven million have been forced to leave their homes, and three million have fled the country. At the same time, regional powers such as Iran and Saudi Arabia are backing opposing sides in the conflict, further frustrating hopes for peace.

Haq said that Syrians participating in the interfaith discussion at Elmhurst were honest about the differences that divide them.

“The differences are real and may be irreconcilable,” he said. “But what was remarkable was that they were able to handle those differences well and talk with each other with respect. That may not be unusual for us here in America, but it is an important step.”

Elmhurst’s focus on interfaith activity made it a fitting forum for a discussion among leaders of Syria’s many religious communities. Affiliated with the United Church of Christ, the College hosts a diverse group of religious guestship lectures, and students of many faiths collaborate on the College’s Spiritual Life Council. At the Niebuhr Center, students team with interfaith and religious groups on community service projects. In 2012, the White House recognized Elmhurst’s efforts to use community service, education and discussion to foster understanding as part of President Obama’s Interfaith and Community Service Campus Challenge.

“This event was an opportunity to talk about ways to avoid sectarian warfare and how to manage religious tensions in Syria,” Haq said. “It is part of a search for consensus about Syria’s future.”