Home » News » Campus Cleaning Up After Severe Rains and Flooding

Campus Cleaning Up After Severe Rains and Flooding

April 19, 2013 | by the Office of Marketing and Communications 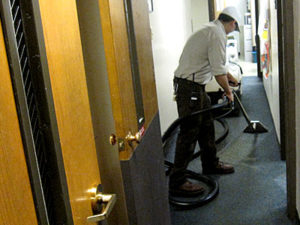 Elmhurst College was open and classes met on Friday, but cleanup work continued on campus, as it did throughout the City of Elmhurst and surrounding communities in the wake of powerful storms late Wednesday and early Thursday that caused widespread flooding.

Working throughout the early morning and into the night Thursday, facilities and maintenance crews and other Elmhurst College staff cleaned up several buildings around campus that had experienced flooding and water damage from the storms.

The affected buildings, which took on water in their basements or on lower levels, included Hammerschmidt Memorial Chapel, the A.C. Buehler Library, Irion Hall, Niebuhr Hall, Schick Hall and Dinkmeyer Hall. The Alexander and West Hall parking lots, as well as some of the houses owned by the College and the Prospect Apartments, also experienced flooding.

Classes and events were cancelled on Thursday due to the conditions on and around campus. Crews spent the day extracting water, disinfecting and cleaning, and using fans to circulate air and dry out carpeting in the buildings. A skeleton dining staff kept the main dining hall open and served breakfast, lunch and dinner to students living on campus.

“I am very grateful to all of our excellent staff for the job they have done and are still doing,” said Elmhurst College President S. Alan Ray. “A very bad situation was spared from becoming much worse, thanks to their work.”

He added that while the College has borne up relatively well, others in the community, including some Elmhurst faculty and staff, have not been as fortunate.

“Our hearts and prayers go out to members of the College family and beyond who have suffered from this storm, and who are only beginning to assess the damage and starting to clean up and rebuild.”