College to Give Tours of New Installation of Chicago Imagist Art

October 8, 2019 | by the Office of Marketing and Communications 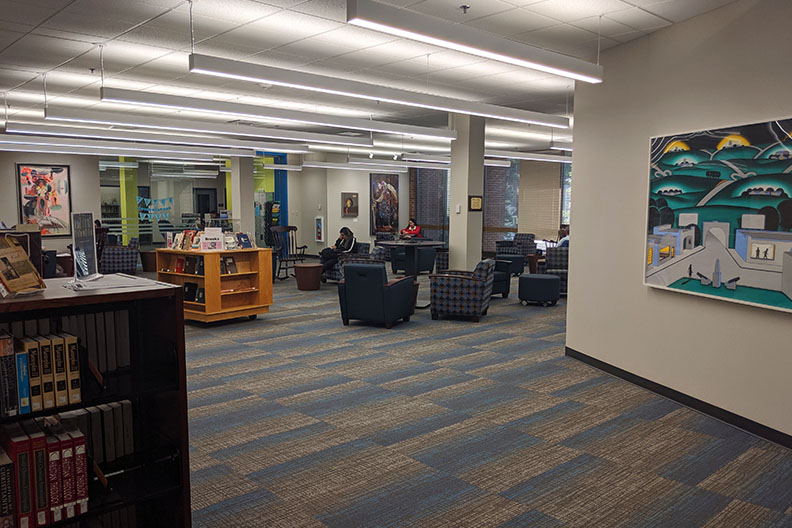 Elmhurst College will offer exclusive tours in October and November of a new installation of artwork from the College’s renowned Chicago Imagist and Abstractionist Art Collection.

The tours, which will be given on Oct. 19 and Nov. 9 at the A.C. Buehler Library, will be led by Suellen Rocca, curator and director of exhibitions at the College and one of the original members of the Hairy Who artists collective that is included among the Chicago Imagists.

The tours are being offered in conjunction with the exhibition What Came After, on view at the Elmhurst Art Museum through Jan. 12, 2020. Organized by artist Phyllis Bramson, What Came After is a survey of diverse interests in the figure as a subject, the human condition, and personal iconography.

According to Bramson, “Many have struggled with understanding and processing the term “Chicago Imagism” since it was first used in the early 1970s, including artists that built on the ideas of their peers or sought to break free from expectations of that legacy. What Came After better defines and celebrates this later generation of artists, which have been called third-generation Imagists, Post-Imagists, and the Chicago School.”

“We are thrilled to work with this group of artists, as well as Elmhurst College again, to dig deeper into Chicago’s rich cultural history. The exhibition builds on an ongoing conversation about Chicago Imagism, which has become broadly and internationally known, but often misunderstood,” said Elmhurst Art Museum Executive Director John McKinnon.

The exhibition is dedicated to the late art critic James Yood, initially involved in early planning of this exhibition, and an advocate of Midwest artists from this particular time period. Yood has called Elmhurst College’s art collection “the best single overview of art from 1966 to 1985 in any public institution.”

Tours of Elmhurst College’s newly reinstalled art collection will begin at 1:30 p.m. on Saturday, Oct. 19, and Saturday, Nov. 9. Tours will meet at the Elmhurst Art Museum (150 South Cottage Hill Ave.), and tickets are free with museum admission or current museum membership. During the tours, Rocca will offer first-person accounts of Chicago’s cultural history, while also providing context and furthering the dialogue about art from Chicago during the ’70s-’90s.