April 29, 2015 | by the Office of Marketing and Communications 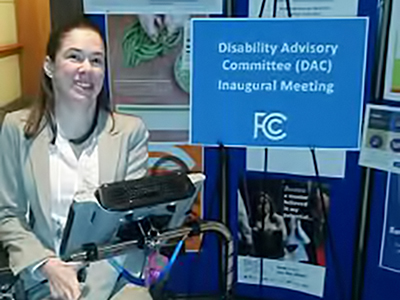 Hannah Thompson ’12 has an intimate understanding of the challenges faced by individuals with disabilities.

Diagnosed with cerebral palsy as an infant, she uses a wheelchair and speaks through a communication device called a DynaVox.

Now, Thompson is advocating on behalf of individuals with disabilities at the federal level. Earlier this year, she was appointed to serve on the Federal Communication Commission’s new Disability Advisory Committee. Launched in December 2014, the committee was formed to provide advice and recommendations to the FCC on a wide array of disability issues.

Thompson was one of only 36 committee members appointed from a pool of 120 applicants.

“It means the world to me to be selected,” says Thompson. “I hope to bring a candid perspective and to advocate for people with disabilities, specifically for people who use communications devices.”

The Disability Advisory Committee met for the first time in March in Washington, D.C. Thompson will return to D.C. three times a year to meet with her subcommittee and continue advocating for people with disabilities.

At Elmhurst College, Thompson thrived as a Phi Mu sorority sister, Student Government Association representative and member of three honor societies. Before graduating, she was named a Lincoln Laureate, a top honor for Illinois college students.

“Hannah was the kind of student I dream about,” said Deatra Sullivan-Morgan, a professor in Elmhurst’s Department of Communication Arts and Sciences. “The words ‘never’ and ‘can’t’ weren’t in her vocabulary. She had all sorts of ideas, and she always made them work.”

An independent study with Sullivan-Morgan sparked Thompson’s enthusiasm for public speaking, which she manages through her DynaVox. “I prepare for a speech by writing it like it will sound coming from my DynaVox,” said Thompson. “I have to think about how everything will sound instead of what it looks like on paper. It’s a really unique experience.”

Sullivan-Morgan said Thompson’s outspoken advocacy and public speaking experience made her a good candidate for the Disability Advisory Committee. “Her voice is important, and her voice is distinct and unique,” she commented.

After graduating, Thompson went on to work for Easter Seals DuPage and the Fox Valley Region. An internship with the River North Business Association turned into a job as the company’s social media coordinator. She also tours the Chicagoland area as a motivational speaker and shares her story on a blog, She Lives Her Dream.

When Sullivan-Morgan found out about Thompson’s new role, she was proud but not surprised. “I think having an Elmhurst grad who’s doing things on the national scale—she is what Elmhurst ought to be,” Sullivan-Morgan said. “She’s the epitome.”

Thompson said she was “humbled” by her selection to the committee. She sees her work there as a chance to reflect on her own achievements, and also the work of those who came before her.

“People with disabilities have been advocating and fighting for their rights since the late 1800s, and to be asked so formally is the greatest honor of my life so far,” she said. “I know I am standing on people’s shoulders, so I don’t take the responsibility lightly.”