December 8, 2017 | by the Office of Marketing and Communications 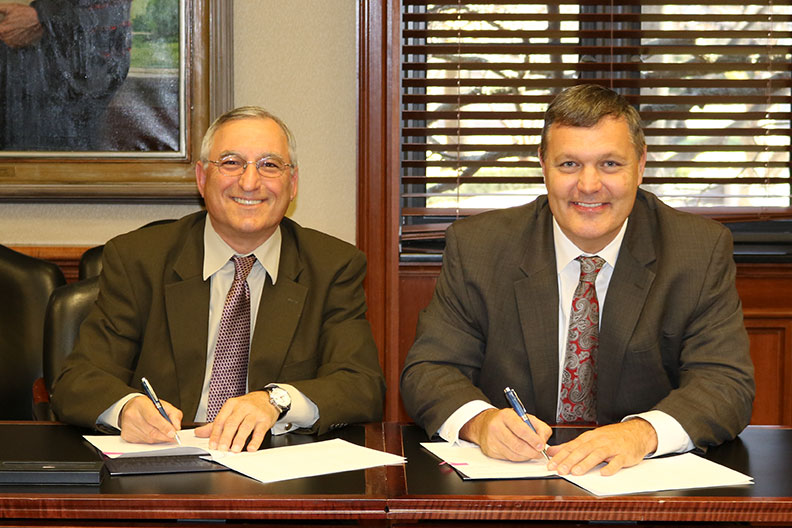 Elmhurst College and Greece-based American Community Schools (ACS), considered one of the leading K-12 international schools in Europe, have signed a partnership agreement that opens the door to a variety of future collaborations.

The partnership agreement is the foundation for other agreements that will ease the path for ACS graduates to attend Elmhurst, and also will facilitate academic, cultural and research exchange programs for students and faculty.

ACS President Stefanos Gialamas, who traveled to campus from Greece for the signing ceremony on Nov. 29, said he values the “long friendship” he has had with Elmhurst College. He added that the partnership agreement is a concrete, promising outcome of the strong relationship and shared values between the two institutions.

Gialamas said 65 ACS students have been spending their weekends tutoring refugee children, and he hopes to send some of them to Elmhurst “so that they may be able to dream, and to make a better and more peaceful world.”

Elmhurst College President Troy D. VanAken noted that these kinds of agreements “really are just the beginning, and create a framework we can build upon. I’m anxious to see where we can take this.”

The College is experiencing its highest enrollments in history, he added, and partnership agreements give the College greater potential to build on those enrollments, “not just in terms of quantity but also quality.” While both Elmhurst College and American Community Schools are doing well on their own, the partnership promises “mutual benefits for the students we serve.”

In October, Elmhurst and the Singapore-based KinderWorld Education Group signed partnership agreements that will smooth the path for students enrolled in KinderWorld schools, in southeast Asia, to attend the College. Closer to home, Elmhurst also has signed guaranteed admission agreements with College of DuPage, Triton College, Moraine Valley Community College and College of Lake County.