September 12, 2012 | by the Office of Marketing and Communications 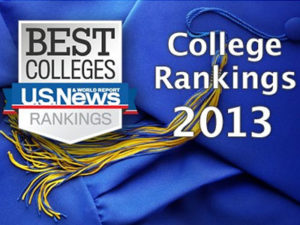 In the overall rankings, the College rose from No. 12 to No. 11 among 150 Midwestern colleges and universities in the Best Regional Universities category.

It marks the first time the College’s rank has risen from No. 12 in the six years the College has been in the Best Regional Universities category, which comprises institutions that provide a full range of undergraduate majors and master’s degree programs. U.S. News’ ranking process and methodology make it very difficult for schools to move up in the ranks, especially when, as in Elmhurst’s case, they already are close to the top. Among schools in the Chicago metropolitan area, Elmhurst maintains the highest ranking in its category. Schools in the 10 slots above Elmhurst include Creighton, Butler and Drake universities, all far larger than Elmhurst.

“In an age of uncertainty and compromise, Elmhurst College is an institution of excellence, principle, and vision,” said President S. Alan Ray. “We know who we are and what we stand for. It is good to see that the larger academic world continues to take notice.”

For the fourth year in a row, U.S. News also named the College a Best Value School, a designation given to institutions that offer an excellent education for the money. In this category, U.S. News calculated the rankings by taking into account a school’s academic quality and the 2011-12 net cost of attendance for a student who receives the average level of need-based financial aid. The higher the quality of the program and the lower the cost, the better the deal. Only schools ranked in or near the top half of their categories are included, because U.S. News considers the most significant values to be among colleges that are above average academically.

The rankings showed that 73 percent of Elmhurst students in 2011 received grants based on financial need. The College notes that, when other forms of aid are added to the picture, 90 percent of full-time Elmhurst students are receiving some form of financial assistance, with the average award adding up to $24,000.

Elmhurst College also continues to score high among its peers in its average freshman retention rate of 82 percent, and has kept its student-faculty ratio at a highly favorable 13 to 1. Sixty-three percent of all classes at Elmhurst had fewer than 20 students per faculty member; none had 50 or more students. Elmhurst students also are well-prepared academically for college-level work, with more than half of the freshmen in 2011 coming from the top 25 percent of their high school class.

In another recent ranking, The Princeton Review, an education services company and publisher of nationally known college guides, named Elmhurst College one of the “Best in the Midwest” for the ninth year in a row.

The recognition is part of The Princeton Review’s 2013 Best Colleges: Region by Region guide, and includes 633 schools recommended as “regional bests” across the Northeast, the Southeast, the Midwest, and the West. Collectively, the colleges named “regional best(s)” constitute about 25 percent of the nation’s 2,500 four-year colleges.