April 30, 2021 | by the Office of Marketing and Communications 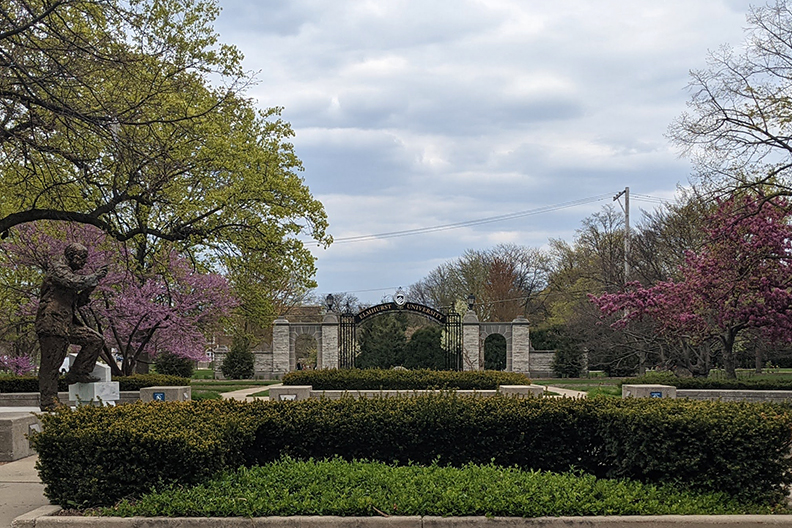 Elmhurst University recently awarded its first President’s Scholarships for Diversity, Equity and Inclusion, established this past fall to augment the University’s ongoing commitment to building a welcoming, inclusive community.

The scholarship winners are two incoming first-year students—one from Chicago, the other from Las Vegas—who have shown an exemplary commitment to furthering diversity, equity and inclusion in their own lives and the lives of others.

“It’s wonderful to see this scholarship already benefiting students,” said Elmhurst University President Troy D. VanAken. “Even more gratifying is how quickly the entire campus community came together to bring it to life. I look forward to the contributions our first scholarship recipients will make here at Elmhurst.”

The President’s Scholarship for Diversity, Equity and Inclusion was launched this past September as a key component of the Actions Speak Louder Than Words Challenge, which enabled Elmhurst students, faculty, staff, alumni and trustees to play an active role in building a more diverse, equitable and inclusive campus. The initial fundraising goal of $200,000 was met in less than three months with contributions from across campus.

In December, the Office of Admission began to seek applications for the $5,000, renewable scholarship. It is awarded to two incoming first-year students per year who have demonstrated contributions to and appreciation for diversity, equity and inclusion in areas that include racial or ethnic diversity, sexual orientation, gender identity, disability and social justice. One scholarship is awarded specifically to a student from Chicago Public Schools.

As part of her application, Nadeau submitted a powerful video about how she and her generation are making a difference and working to achieve the American Dream of unity, equality and freedom.

“To me, the American Dream means a better future and acceptance for the people who live here, no matter who you are, where you come from, the color of your skin or your gender identity,” she said. “I know that in the future none of that will matter because all that will matter is that you are human and you are alive.”

Johnson wrote a moving essay about empathy, understanding and not pre-judging others. He described his friendship with a classmate who was bullied, and how his own experiences, as a child adopted from Guatemala by a white family, tell a far more complicated story about race and equity than one might assume.

“At Elmhurst, I would like to help build an inclusive community because I empathize with those who are not heard,” he wrote. “I am a person who can amplify the voices of others, and can help create unity and bridges between diverse people.”

In its inaugural year, the scholarship drew 37 applications from across Illinois and around the country, including from Maine, Colorado and Arizona. The DEI Scholarship Committee reviewed and discussed the applications and recommended finalists. The Committee members were: