Home » News » Elmhurst U. Bands to Give Holiday Concert on Dec. 12

Elmhurst U. Bands to Give Holiday Concert on Dec. 12

December 2, 2021 | by the Office of Marketing and Communications 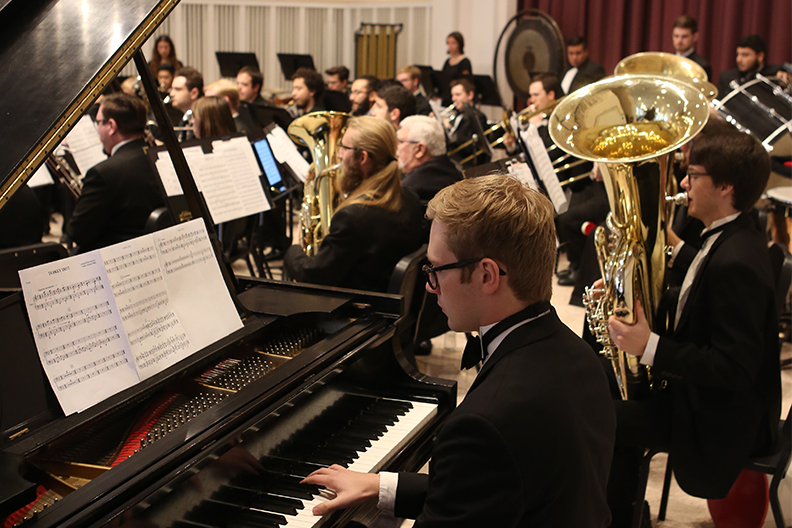 The Elmhurst University Symphonic Band and Wind Ensemble will present their annual Holiday Concert on Sunday evening, Dec. 12, featuring a variety of holiday music and concluding with an audience sing-along.

The concert will open with the Wind Ensemble performing John Wasson’s Festival Fanfare for Christmas, originally composed for the Dallas Symphony Orchestra. Rimsky-Korsakov’s “Dance of the Tumblers” from the opera The Snow Maiden, along with the “Adagio” from Arcangelo Corelli’s Christmas Concerto and Mozart’s “Forgiveness” from The Marriage of Figaro will provide classical contrast to the jazzy Blue Shades by Frank Ticheli.

The Elmhurst University Chamber Chorale will be featured in “Somewhere in My Memory,” composed by John Williams from his musical score for the movie Home Alone. The first portion of the concert will conclude with Minor Alterations by David Lovrien, a musical twist on Christmas carols as seen through a looking glass.

The Symphonic Band will open the second half of the program with It’s the Most Wonderful Time of the Year, a traditional holiday favorite. A medley of holiday music by Irving Berlin will follow, including Let’s Start the New Year Right and White Christmas, originally performed by Bing Crosby in the motion picture Holiday Inn.

A unique collection of four carols from the Renaissance also will be performed—carols that are among the most beautiful still sung and performed today, 500 years later.

You’ll hear those sleigh bells jingling in a wonderful world of snow in Leroy Anderson’s Sleigh Ride, and the concert will conclude with an audience sing-along to some of the most delightful Christmas carols from Anderson’s famous Christmas Festival. And who knows … there may be a visit by a jolly gentleman in a red suit!

The Elmhurst University Bands Holiday Concert will begin at 7:00 p.m. on Sunday, Dec. 12, in Hammerschmidt Memorial Chapel (190 Prospect Ave., Elmhurst, elmhurst.edu/campusmap). Admission is free and all are welcome to attend.