Elmhurst U. Celebrates a Historic Homecoming 2020

October 8, 2020 | by the Office of Marketing and Communications 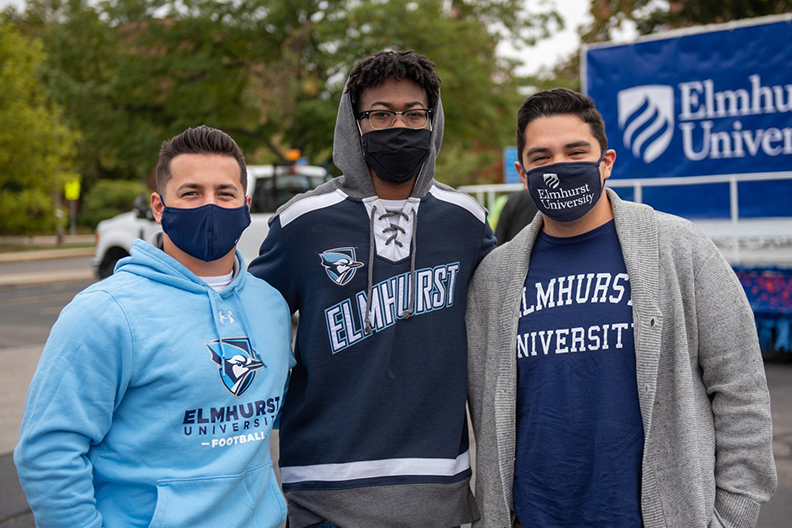 From a drive-in movie experience to a livestreamed campus parade, Homecoming 2020: Live in Color offered a variety of in-person and remote events throughout the week of Sept. 28 through Oct. 4.

During the week, students took part in the annual Medallion Hunt, Blacklight Mini Golf on the Mall, bumper cars in the Founders Lounge, virtual games and other activities—all held according to University health and safety guidelines.

On Thursday, Oct. 1, Olympic medalist Laurie Hernandez delivered the Roland Quest Lecture “I Got This: To Gold and Beyond” over Zoom, sharing the inspirational story of her journey to the 2016 Olympics and calling for a greater public focus on mental illness, especially among young people.

The following evening, the Alexander parking lot was transformed into a drive-in movie theater for two sold-out showings of the animated comedy Shrek. The drive-in was “hands down” the most popular Homecoming event among the students, said Union Board Homecoming Chair Jenna Kowalczyk ’20.

“As something that we have not done on campus before, it was exciting for everyone, especially since the students were able to vote on the featured selection,” she said. “With everything going on, the student body embraced the changes this year and made the best of our situation.”

On Saturday, more than 40 festively decorated vehicles, including cars, trucks, golf carts and motorized floats, took part in the second annual Homecoming Parade. Traveling throughout campus to spread Bluejay spirit, the parade was livestreamed to spectators at home.

Each entry also was judged this year, with points awarded for originality, best use of the Live in Color theme, most enthusiasm shown by the participants and other criteria. The winning entries, which will be awarded a trophy, are:

Homecoming Weekend ended with the traditional Sunday Service, shared virtually on YouTube. The Rev. H. Scott Matheney opened the service with the ringing of the hash bell, then shared prayers and messages from President Troy and Dr. Annette VanAken, and reflections from Elmhurst alumni.

“Today we have so much to be thankful for,” President VanAken said. “And as we look to our history, and look at the lives that have been transformed and the contributions our alumni have made to society, we continue to build the kind of higher education institution that you can be proud of.”

“Homecoming has always meant so much to our alumni and friends,” he said. “I look forward to when we can welcome you back to campus again.”