February 24, 2021 | by the Office of Marketing and Communications 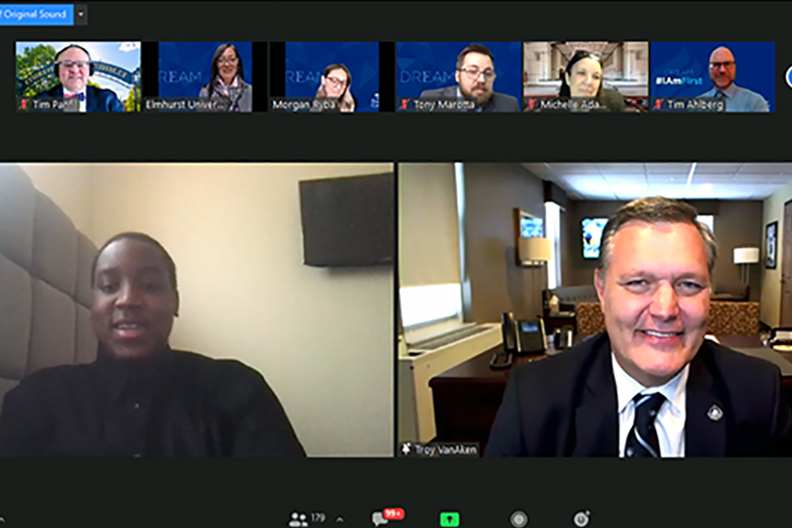 Staring into his computer, Jorden Young-Gentry was “so surprised, I thought it could not be me” when his name was announced as the 2021 winner of Elmhurst University’s American Dream Fellowship Competition.

But it was nothing compared to the reaction by his mom, who sat next to him in their Chicago home. “She literally jumped out of her chair” and immediately phoned his father to shout the great news, Young-Gentry said.

It was a fitting way for Young-Gentry to find out that he’d just been awarded a four-year, full-tuition scholarship to attend Elmhurst University in the fall. “I’m essentially doing this for my family,” he said. “Everything I do to further my education is for them.”

He and more than 130 other high school students took part in this year’s American Dream Fellowship Competition, which celebrates first-generation college students. The winners were announced on Feb. 15 during an awards ceremony held virtually because of the COVID-19 pandemic.

On Feb. 15, the finalists participated virtually in a group project activity and attended panel discussions with current students and workshops about making the transition to college life. The morning was capped off with the announcement of the award winners.

Young-Gentry’s video, “My American Dream Story,” describes his longtime goal of becoming a teacher and his desire to set a good example for his younger siblings.

Cassadie Comiskey, a senior at Alan B. Shepard High School in Palos Heights, Ill., received the second-place award—four years’ room and board at Elmhurst. The Alsip, Ill., resident plans to major in music business.

Elmhurst University also announced winners of the award for best group: Jesus Reyes, Noah Ricafrente, Alexis Rivas, Madison Rivera, Angelina Rodriguez and Patricia Rutkowski. Each member of the group won a $5,000 renewable scholarship that would be in addition to any other financial aid each student received.

“Definitely,” he said. “I want the full experience.”