Elmhurst U. Presents 2022 President’s Awards for Excellence in Teaching

June 2, 2022 | by the Office of Marketing and Communications 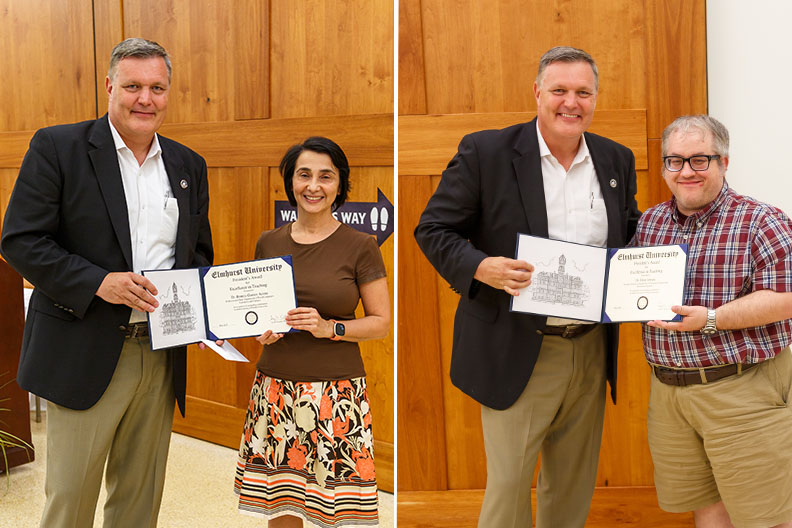 Elmhurst University recently presented the annual President’s Award for Excellence in Teaching to Beatriz Gómez Acuña, professor of Spanish and chair of the Department of World Languages, Literatures and Cultures; and Dean Jensen, assistant professor of computer science and information systems.

Each year, two faculty are selected to receive the President’s Award for Excellence in Teaching, which recognizes exemplary teaching and contributions to the education of Elmhurst students. Groups of three or more students nominate faculty members for the award, and support their nominations before members of the Faculty Development Committee. The committee reviews nominating statements, participates in and watches recorded interviews, discusses nominations extensively, and recommends finalists to Elmhurst University President Troy D. VanAken.

“Both Beatriz and Dean are deeply dedicated to their students’ success,” President VanAken said. “They take their work personally, and exemplify Elmhurst’s commitment to excellence in teaching and student learning.”

Gómez Acuña, of Evanston, has taught at Elmhurst since 2007. In nominating her for the award, students praised her dedication to teaching, concern for their well-being, and support both in and out of the classroom.

“It is a great honor to have received the award,” Gómez Acuña said. “There were 10 nominees this year, all of them extremely talented educators. To have been selected makes me feel esteemed and valued. I also feel validated.”

Students said they felt included, respected and safe in her classroom. They also praised her extensive organization within the classroom, and said she created an engaging, active learning environment that kept them highly motivated. She also was described as proactive, reaching out to students with opportunities and supporting them in their endeavors. Students commented, “She never leaves you stranded,” “She always has your back,” and “She will never leave us in a position where we don’t know what we are doing.”

“I am extremely grateful for the students who nominated me,” Gómez Acuña said. “I am humbled that they think of me in those high terms. I am happy that they have thrived in my classes and that they consider me a mentor and a role model.”

Jensen, of Lombard, first taught at Elmhurst in 2002 as an adjunct faculty member while working in the technology sector, and eventually switched to full-time teaching in 2017. Students who nominated him described him as an extremely accessible instructor—one who responds to email almost immediately, and hops onto video calls at a moment’s notice—with great enthusiasm for the material he teaches.

Whether in his graduate or undergraduate classes, students said Jensen was engaging, supportive, and adept at working with each student based on their individual needs. His kindness and ability to connect with struggling students also was praised repeatedly, and several students cited the times he personally reached out to them as instrumental to their decision to continue in their programs.

Jensen said he was amazed at what students had to say, and that winning the award was “humbling beyond belief.”

“To me, I just sent an email late one evening,” he said, “but I guess we don’t know how powerful those messages to students can be.”