March 3, 2015 | by the Office of Marketing and Communications 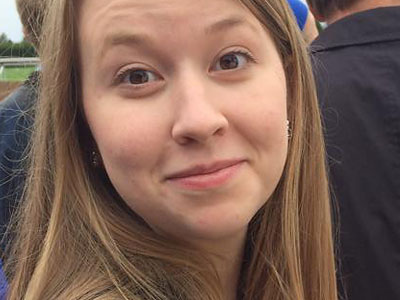 Margaret Sumney realized she wanted to major in philosophy after she received a B minus on a paper for her first-year philosophy course.

For Sumney, who was used to receiving considerably higher grades on her work as a high school student in Lexington, Kentucky, the B minus seemed like a minor disaster. She hurried off to ask Associate Professor of Philosophy Katrina Sifferd what she had done to deserve such a grade.

“I was really upset,” Sumney, now a senior, remembers. Sifferd’s explanation stung Sumney, but also inspired her. The professor told Sumney that she would do well in the course as soon as she learned that the effort that got her As in high school would not necessarily suffice in college.

“She challenged me,” Sumney said. “She made it clear that she expects the highest caliber work from her students. It really made an impact on me. It’s a wonderful thing to have a professor who pushes you to use your brain, and trusts that you’re smart enough to do so.”

Sumney has proven that she’s up to Sifferd’s challenge. In fact, her professors in the philosophy department were so impressed with Sumney’s work that they invited her this fall to join a weekly faculty discussion group focused on research related to philosophy, neuroscience and the law. Sumney is the only undergraduate in the group, which also includes Sifferd and Professor William Hirstein. This fall, Sumney helped the research group craft a grant proposal at the invitation of the John Templeton Foundation. The grant would fund a project exploring how neuroscientific insights into brain processes may affect legal notions of criminal culpability. Sifferd said she expects the project to culminate in a book, with the working title The Guilty Brain.

“She has fantastic ideas,” Sifferd said of her student. “We saw that she had the skills to participate in a meaningful way. She understands how to make an argument.”

Sifferd called Sumney a front-runner for the philosophy department’s annual student of the year award.

Sumney is now at work on a pair of papers that deploy sources as diverse as the philosopher Ludwig Wittgenstein and the psychologist B.F. Skinner to analyze criminal culpability in people in diminished or impaired mental states. She plans to submit the papers for publication in philosophy journals.

Her work in philosophy and neuroscience represents a departure from the academic course Sumney had set for herself. She came to Elmhurst planning to study theology before moving on to graduate studies at a seminary. Her father, Jerry Sumney, a professor of Biblical studies at Lexington Theological Seminary, pointed her to Elmhurst for the chance to work with Professor Andrew Das in the religious studies department. Sumney now studies with Das and maintains a double major in religious studies and philosophy. But, inspired by her Elmhurst professors, Sumney’s career plans began to shift. She said she is now considering a career in academia.

“They have been great influences,” Sumney said of her professors. “They have made my college experience really special.”

She calls the opportunity to collaborate with her philosophy professors “a cool experience,” but admits that she was at first hesitant to speak up in the meetings. She recalls sitting silently in the group’s first meeting in Sifferd’s office, while her professors talked through their work.

“After our first meeting, I realized that I had to make this one of my top priorities.”

“She has excellent reading and writing skills, and now she is learning to revise. That’s a great place to be in your last year as an undergraduate,” Sifferd said. She said that such collaborations can be “a fantastic experience, especially for students who are planning on going on to graduate school.”

“I’ve learned more than I ever could in a classroom,” she said.