March 21, 2012 | by the Office of Marketing and Communications 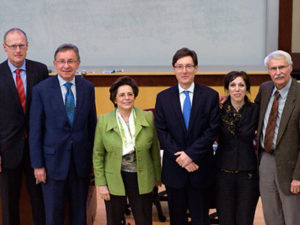 They are diplomats, but the representatives of five European nations who gathered recently in Illinois Hall did not shy away from tackling some of Europe’s most sensitive topics, including the European Union debt crisis, the upcoming G8 and NATO summits, and struggles with immigration.

“Celebrating Europe: Transatlantic Ties in Turbulent Times” brought together Chicago-based diplomats from France, Germany, Greece, Poland and Spain for a roundtable discussion earlier this month that was hosted by Elmhurst’s Department of World Languages, Literatures & Cultures.

The diplomats began by highlighting the cultural, scientific and economic strengths of their respective countries. They also noted their cultural and economic ties to Illinois. France, for example, boasts having 200 companies employing 25,000 people in Illinois, while Germany lists 160 companies with 36,000 workers in the state.

But the discussion quickly shifted to Europe’s most pressing issue: the sovereign debt crisis facing some of the 27 countries in the European Union. Chief among those struggling countries is Greece, which risks defaulting on its loans and dragging down the entire European economy. Greek Consul General Ioanna Efthymiadou acknowledged that her country is struggling to solve its debt crisis, but finding the right solution isn’t easy. “Austerity measures are a Band-Aid quick fix, not a long term answer,” Efthymiadou said. “We have to have the right mix of solutions: incentives to grow, alongside proper structural reforms.”

Even more economically stable countries, such as Germany, worry about mounting debt. German Deputy Consul General Helmut Rausch said his country is concerned about its ability to fund state pensions, and has raised the minimum retirement age to 67. “Germany has one of the lowest birth rates in Europe, and in the future, we will have trouble funding all the pensions. They will have to be financed by other government funds,” Rausch said.

The diplomats are hopeful that world leaders might make some progress toward finding answers when they meet at the upcoming G8 and NATO summits. French Consul General Graham Paul said it’s important that the United States assure its European trading partners that they will not be neglected, even as China and other Asian countries become greater economic powers.

“The challenge of the G8 will be to reassure Europe that it remains at the center of the economic system,” Paul said. “The Asian countries are newcomers and we need to integrate them into the system. But we don’t want them to change the rules.”

While the White House recently decided to move the G8 summit from Chicago to Camp David, the local diplomats still are busy preparing for the May 20-21 NATO summit in the Windy City. They must plan accommodations, meals, entertainment and other arrangements for visiting leaders from their respective countries. “The NATO summit is a very important event and is keeping us very busy,” said Polish Consul General Robert Rusiecki.

European social issues also were a major focus of the forum, including the challenge each country faces with immigration. France has come under fire of late for banning Islamic face-coverings in public places, and for comments by President Nicolas Sarkozy that France has “too many foreigners.” When the economy weakened and competition rose for jobs, relations grew strained between immigrants and non-immigrants, Paul said. “When the economy was good, integration of immigrants was easy,” he said. “As the number of unemployed rose, the newcomers became targets.”

Germany has struggled to assimilate its growing Muslim population, Rausch said. The revelation that some of the 9/11 terrorists were based in Hamburg only heightened the tensions, he said. “It has not been so easy to combine [immigrants with native Germans],” he said. “They live in their own neighborhoods. We live in ours. There has been no integration.”

Even Poland, which traditionally has had a homogenous population, is facing increasing challenges with immigration, Rusiecki said. Specifically, Poland’s low birth rate will likely require the country to attract immigrants from Asia and Africa to fill vacant jobs, he said. “For the first time, we will be importing people who are not the same as us,” Rusiecki said. “It will be a new phenomenon for Poland, with significant cultural, social and economic impacts.”

Moderator Les Caltvedt, professor of German and French at the College, was pleased with how candid the diplomats were about the challenges facing their countries. “There was some concern that some of the diplomats might be sensitive to the issues. But to their credit, they addressed each question,” he said. “It turned out to be a lively and intelligent discussion.”