March 11, 2014 | by the Office of Marketing and Communications 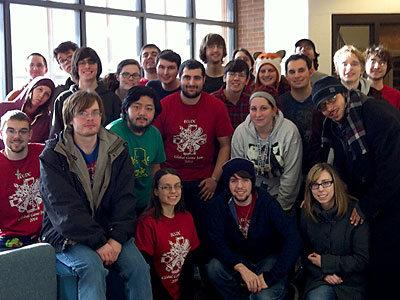 On a Friday evening in January, more than 20 members of the Elmhurst College Game Developers Club arrived on the second floor of Daniels Hall armed with laptops and sleeping bags.

Over the next two days, the Elmhurst students and alumni worked around the clock to achieve a single goal: to create a video game in 48 hours.

The challenge would take grit, determination and huge amounts of caffeine. By the time Sunday rolled around, they hadn’t created just one game. They’d created four.

For the third year in a row, the Game Developers Club participated in the Global Game Jam, a worldwide game-creation event. Across the globe, hundreds of game developers simultaneously set up hubs with the purpose of creating video games in just 48 hours. Last year’s event attracted developers in 309 locations and resulted in the creation of more than 3,000 games.

Starting on January 23, the Elmhurst group worked for 48 straight hours writing, designing and programming their own games. By the time the jam ended on January 25, the game developers were groggy and victorious: They’d created four unique games, all now available on the Global Game Jam website.

On Friday, the Elmhurst jammers kicked off the weekend by brainstorming, pitching ideas and breaking into four teams. Art, English and music students worked in tandem with computer gaming students to contribute designs, stories and music for the final product.

The workspace was divided into four zones: two work rooms, where students hunched over keyboards and computer screens; one snack room, complete with fuel provided by Chartwells; and one quiet room featuring air mattresses and sleeping bags.

The Game Developers Club started preparing for the Global Game Jam in early January. Examining past Game Jam themes and results, the members created a practice game to help them predict trouble spots and prepare for them.

O’Malley said the biggest challenge was developing a workable scope for the weekend’s breakneck pace. “When you only have a couple hours left and you realize that only half the game is finished, you kind of have a problem,” he says. “Everyone thinks they understand scope until they do Global Game Jam.”

Each of the four games completed by the Elmhurst club has its own distinct style and genre. In the maze game Descenters, players navigate booby traps to escape from a tower. Lucernae is a puzzle game in which players investigate strange occurrences plaguing a town. The story-telling game My Colorful World tells the tale of a elderly man who recalls moments throughout his life through key items in his house. And the sci fi game Prophecy of Samyer pits two planets against each other in a race to find a powerful weapon.

Club advisor Linda Krause, associate professor in the Department of Computer Science and Information Systems, checked in on the jammers several times during the weekend. “Friday night is excitement, Saturday morning is a little more subdued and quiet,” she said. “Saturday afternoon they get a second wind, and Sunday it’s complete silence.”

But in the end, the work gets done. “I’m always very impressed with what they produce,” said Krause. “I think they do phenomenal work in 48 hours.”