May 22, 2020 | by the Office of Marketing and Communications 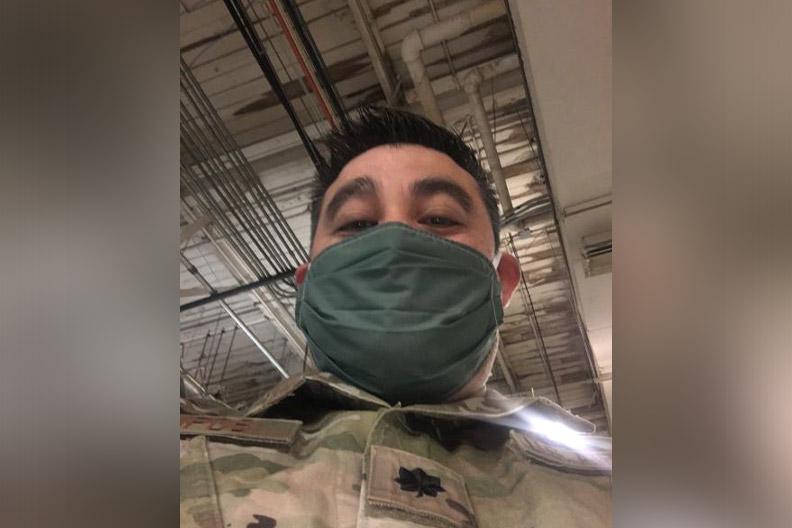 Ignacio Campos has spent the past two years working toward his master of project management at Elmhurst College, juggling his role as a married father of three, his job and his coursework.

In March, just two months shy of reaching his goal, another duty came calling. Campos was sent to Springfield with his Air National Guard unit to assist in Illinois’ response to the COVID-19 pandemic. That might rattle some people, but Campos took it as an opportunity to put his project management skills to work.

“It’s a big project to me. That’s the way I look at it,” said Campos, who has been with the Guard for 18 years, including the past seven as a bioenvironmental engineer.

Campos serves as the officer in charge (OIC) of Task Force EOC LNO in Springfield, overseeing 96 Guard members deployed in Emergency Operations Centers around the state. Campos and his team are responsible for calling hospitals and long-term care facilities to gather a wide range of information such as supply needs and equipment shortages.

“We’re trying to get resources to the hospitals and the long-term care facilities,” Campos said. “I go about it this way: I need to get supplies to ‘X,’ so we need to get the data to the right people. That’s what project management is all about. You initialize, you plan, you execute, you close out the project. That’s what we’re doing here.”

Despite “crazy hours,” Campos—whose civilian job is as a mechanical designer at S&C Electric in Chicago—has not let his Air National Guard duty prevent him from earning his master’s degree.

Professor Bruce Fischer, director of the master of project management program, has seen Campos’ dedication firsthand. Campos has been in several of Fischer’s classes, including Operations Management this term. It is an EC Flex course format made up of online and in-person classes.

“He’s called me when there was something he needed to tell me,” Fischer said. “Otherwise, he participates in the discussion board and the quizzes assigned every week. He’s kept up with the class despite his heavy workload. I told him he’s going to have a great project management story, and he said ‘Yes, Professor Fischer, I will.’”

Fischer said Campos is an embodiment of the project management program’s motto: “Be the one who gets it done.”

A self-proclaimed “lifetime learner,” Campos, 49, earned his bachelor’s in mechanical engineering from Purdue University and a master of business administration from National Louis University.

Even after he gets his master of project management, he said his time at the College might not be complete.

“I’ve always been around the campus,” said Campos, an Elmhurst resident. “The program has been awesome. Once I get done, I’d be happy to help out any which way I can. It’s been great.”