May 21, 2014 | by the Office of Marketing and Communications 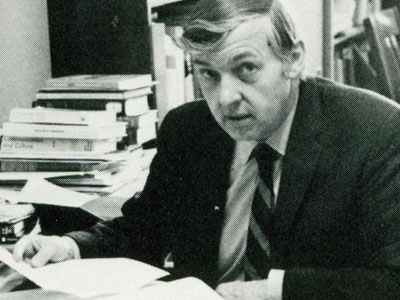 For 32 years, Professor John E. Gow was a fixture in Elmhurst College’s speech and communications departments, establishing a reputation with students and staff alike as a strong instructor and, fittingly, a thoughtful communicator.

After retiring from the College in 1993, Professor Gow put his communication skills to use for the good of his community, running for and winning a seat on Elmhurst’s City Council. He ended up serving three four-year terms, leaving a mark as a forceful advocate for protecting historic buildings around Elmhurst.

Professor Gow died at his Elmhurst home on March 8 after battling both multiple myeloma and prostate cancer. He was 82.

On campus, Professor Gow is remembered as a dedicated teacher with a deep intellect who took a great interest in his students and served as a parliamentarian during faculty meetings.

“I always remember John as one of the smartest guys I ever knew,” said Alan Weiger ’72, an associate professor and chair of the Department of Communication Arts and Sciences at the College who also studied under Professor Gow. “He was so intelligent, erudite and very well read. I was always impressed with his knowledge of facts and theory. And he had a great sense of humor, and a great laugh.”

Professor Gow was born in Attleboro, Massachusetts, and earned a bachelor’s degree from Allegheny College in northwest Pennsylvania. After earning master’s degrees from the University of Iowa and the Illinois Institute of Technology, he began teaching at Wright Junior College in Chicago. He then joined Elmhurst in 1961, teaching courses in the College’s speech department.

Professor Gow taught a variety of courses, including argumentation and persuasion, radio production and communications theory. He also worked with the College’s debate team as it traveled to debate events around the country.

Professor Gow wasn’t especially slick as a teacher, former students recalled. However, he offered keen insights into the nature of communication and how best to convey a message while speaking publicly, said John Quigley ’77, a former student of Professor Gow’s who went on to serve as associate director of communications at the College and now president and CEO of the Elmhurst Chamber of Commerce & Industry.

“He taught me that there’s more to communicating than just eye contact or the words you’re saying,” Quigley said. “John Gow taught us that it was just as important to listen to others and to make sure to take into account your audience. If you just get caught up in what you want to say and how you’d say it, you miss the point of communication. For John Gow, it was making sure you accurately communicate the message to the audience to whom you want to communicate it.”

Betsy Kuebler, who recently retired from the College after a 46-year career that included work in residence halls, the admission office and with graduate students, recalled Professor Gow’s careful and thoughtful demeanor.

“I think John’s reputation…was one of sincerity. He was the most sincere person on Earth,” she said. “Whenever John spoke, you knew he’d given whatever he was going to say a lot of thought. He also was a real gentleman. He was very kind and so polite to people. He cared a lot about the College and the community, and most of all his students. He loved his students.”

Larry Carroll, the executive director of the Center for Professional Excellence and a business professor at the College, recalled Professor Gow’s dry sense of humor, steady influence and his twin passions, which were his students and local government.

“He was a guy who was just kind of a deep thinker, but he was very down to earth and willing to work with students,” Carroll said. “And he was very passionate about his students. He had a heart of gold.”

Wally Lagerwey, director of international education and off-campus programs for the Center for Professional Excellence, recalled Professor Gow’s outspoken views during faculty meetings, describing him as “an articulate member of the community, given his public speaking background.”

Professor Gow retired from Elmhurst College in 1993. He long had sought to enter electoral politics, making unsuccessful bids to serve on the board of the College of DuPage in 1966 and for a seat on the DuPage County Board in 1972. So in 1997, after retiring, he ran for a seat on the Elmhurst City Council—and won. During 12 years on the Council, he was instrumental in the passage in 2006 of a historic preservation ordinance that is designed to help protect historically and architecturally significant structures in town.

“John was a communications guy by profession, and I thought he communicated with the citizens of his ward extremely well,” said Darrell Whistler, chairman of Elmhurst’s Zoning and Planning Commission.

Quigley said he always appreciated Professor Gow’s interest in issues beyond the Elmhurst College campus. “What I liked at Elmhurst was that teachers like John Gow were immersed in their students’ lives and in the community,” he said.

Professor Gow is survived by his wife, Olivia, and by a son, a daughter and a granddaughter.