January 24, 2012 | by the Office of Marketing and Communications 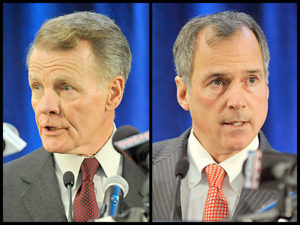 With Illinois facing a projected $500 million budget deficit, a backlog of $8.5 billion in unpaid bills and $6.8 billion in pension obligations, solutions won’t come easily. “I’m not going to sugar-coat it,” Madigan said. “It’s not going to be a short-term process.”

Madigan, who also is chairman of the Democratic Party of Illinois, appeared at the 5th Annual Elmhurst College Governmental Forum at the invitation of his former longtime political rival, Lee Daniels, who now is special assistant to the president for government and community relations at Elmhurst and a distinguished fellow in the College’s Department of Political Science.

The forum on January 24 also featured Lance Pressl, president of the Chicagoland Chamber of Commerce Foundation, who presented new research on the Chicago region’s economic competitiveness.

Although onetime rivals, Daniels and Madigan were able to put aside their differences when it mattered. Madigan, who represents the 22nd District on Chicago’s Southwest Side, is the state’s longest-serving speaker, having held the position for all but two years since 1983. Those were the two years–1995 to 1997–when Daniels served as speaker. Representing the 46th District in DuPage County, Daniels served in the Illinois House from 1975 to 2007, and was the Republican leader from 1983 to 2003.

“When at times we said disparaging things in public, in private, we were able to come together and get the people’s work done,” Daniels said of his relationship with Madigan.

Pension reform is controversial
Daniels praised Madigan’s accomplishments and encouraged the speaker to continue to address the state’s financial troubles. “I urge him to use all his talent and ability to resolve our state’s problems,” Daniels said.

Madigan answered the challenge by outlining some of the legislature’s accomplishments during its most recent session.

Lawmakers passed reforms to the state’s workers’ compensation and unemployment insurance laws, designed to trim expenses for the state and for employers, Madigan said. The legislature also passed education reforms to make it easier for schools to weed out bad teachers.

It was the state’s budget and pension fund shortfalls that garnered the most interest from the audience.

Madigan said lawmakers made some tough decisions last year by temporarily raising the state’s income tax from 3 percent to 5 percent, and by imposing a spending cap on the budget. He was reluctant to answer questions about whether the income tax increase should be made permanent, and chided critics who complain that taxes are too high or too low.

On pension reform, Madigan noted that a proposal to cut future benefits for current state workers or retirees is controversial: “You tell someone on the job, ‘What you earned today, you keep. After today, it’s a new deal.’ My view is, that’s the last place people want to go.”

Madigan went from policy to personal when Daniels asked him to assess the seven Illinois governors he had worked with during his tenure.

Region needs to break down barriers
Republican Gov. Jim Thompson understood the art of compromise, Madigan said, while Republican Gov. Jim Edgar was more “strident, as a student of government willing to engage in protracted negotiations to get what he wanted.”

Madigan praised Republican Gov. George Ryan for his ability to work deals with legislative leaders, even if it took some not so subtle arm-twisting. And he had only scorn for Democratic Gov. Rod Blagojevich, “who had a different agenda, all related to what he was going to do later in life.”

While Madigan addressed the state’s day-to-day business, Pressl looked to the future in presenting the results of a Chicagoland Chamber of Commerce Foundation study of the region’s economy.

Conducted by the Paris-based Organization for Economic Cooperation and Development (OECD), the study focused on the economy of a three-state region that includes the Chicago metropolitan area, southeast Wisconsin and northwest Indiana.

The study was launched after a 2004 analysis by a Boston research group ranked Chicago dead last among the nation’s 50 largest cities based on economic and political metrics such as government and fiscal policy, technology and business incubation.

The OECD study showed that Chicago still lags well behind other large cities in the world, ranking 49th among major international cities for labor productivity and below average for economic growth.

The report concludes that the region needs to break down geographic and political barriers and work together to attract new business, Pressl said.

“We don’t all need to sing ‘Kumbaya’ together, but rather than competing against each other, we ought to be looking for opportunities to collaborate,” Pressl said.

The prevalent economic development strategy is for states, counties and towns to try to steal business from each other by dangling tax breaks and financial incentives, Pressl said. The OECD study suggests that Illinois, Indiana and Wisconsin focus on four areas: business innovation, workforce development, transportation and green technologies.

“We don’t have to agree on everything,” Pressl said. “But we do have to build trust.”