March 21, 2018 | by the Office of Marketing and Communications 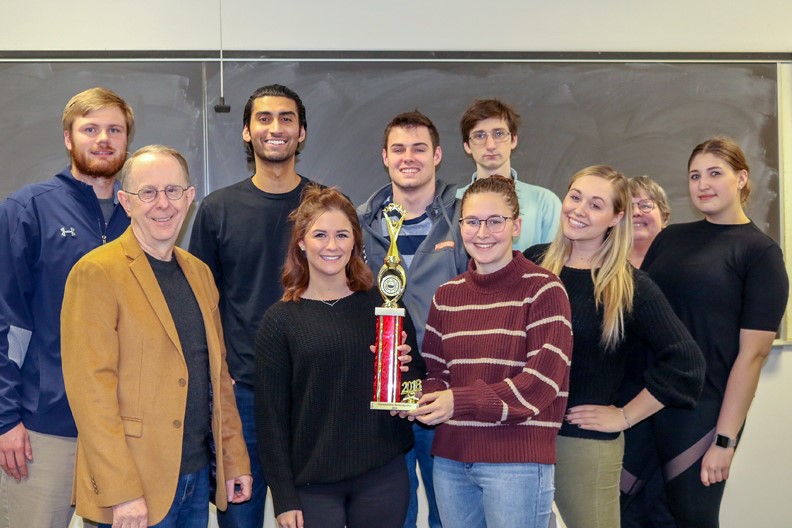 The Elmhurst College Mock Trial Team recently bested 24 teams from some of the largest universities and colleges in the region to win second place in the American Mock Trial Association’s Regional Tournament.

Competing against teams from the University of Michigan, Northwestern University and other schools, the Elmhurst team won seven of eight ballots to take second place. In addition, team member Keeley Thayer ’18 won an Outstanding Attorney award with a perfect score of 20.

“In my 10 years with Elmhurst College, this is only the second time we have advanced beyond the Regional tournament,” said Mary Walsh, associate professor of political science and one of the team’s faculty advisors. “Our showing in Regionals was the best it’s ever been, by far.”

“What’s remarkable to me about this win is that the team was competing against schools in all different divisions,” noted Tom Dudgeon, a retired DuPage County judge who co-coaches the team with Ed Momkus, an attorney and chair of the College’s Board of Trustees.

“In athletics, colleges normally compete against schools in their own division. But in Mock Trial, you might be up against a school your own size in one round, then the next round you’re up against the University of Michigan, which has four teams and 50,000 students to choose from.”

The Mock Trial program aims to teach students about the American legal system and develop their analytical skills. Team members engage in trial simulations in competition with teams from other schools, developing arguments for both sides of a given case and playing the roles of attorneys and witnesses.

Many participating students join Mock Trial as a stepping-stone to law school. Out of 10 students currently on the team, five plan to attend law school next year.

“Most of us on the team are pre-law, and Mock Trial is a great way to get some legal experience,” notes Ali Ahmed ’18, who plans to attend the University of Wisconsin Law School. “Our coaches are very well versed in the legal system and offer a lot of insights.”

For others, the program offers everything from a better understanding of how laws are structured to the ability to formulate arguments and evaluate information.

“This experience changes the way you listen to and read things,” said Jim Scales ’18. “You start to say, ‘Where’s the support for this?’ No other class in college made me think so critically.”

For Dudgeon, that’s exactly the point of the program. “We live in a world where everybody’s right,” he said. “The analytical thinking students do in Mock Trial forces them to critique themselves, argue both sides of an issue and see the pros and the cons. It’s a way of helping bridge the gaps between tribes.”

Students typically meet three times a week during the academic year, preparing arguments and counter-arguments and developing strategy. They stage informal scrimmages with local colleges in the fall, then compete in American Mock Trial Association competitions during Spring Term.

“Being on the team takes a big commitment,” noted Gina Leali ’18. “When I first looked into joining the team, it looked scary from the outside. But when I joined, I found a team and a family.”