June 15, 2015 | by the Office of Marketing and Communications 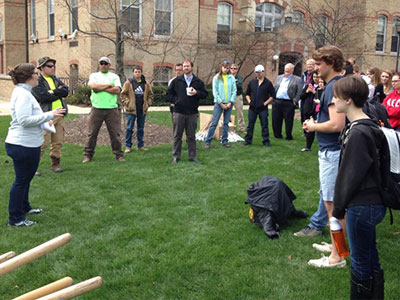 The beech is part of an ongoing effort to honor the vision of the arboretum’s founders: Herb Licht, an Elmhurst plantsman who in the mid-1960s, convinced the College’s leadership to support an ambitious planting campaign that would create a diverse collection of trees and shrubs on campus; and Ragnar Moen, who as the College’s groundskeeper tended the arboretum for 34 years and planted many of its specimens himself.

Today the arboretum, accredited by the Morton Register of Arboreta, is a destination for plant lovers and a delight for students and visitors. It holds more than 800 trees and shrubs representing some 120 species.

The Arbor Day planting was inspired by a discovery Hack made recently in the College’s files: notes from Licht and Moen outlining their plans for the arboretum. Although the notes are not dated, Hack guesses they might date from sometime around 1966, when the two began collaborating on the new campus collection. According to the note, the two planned “to build, maintain and preserve to maturity a collection of as many species of beech and oak trees as space, climate and availability permit.”

The newest tree adds to the College’s extensive beech collection, but is the first of its variety to be planted on campus. Originating in Germany, the variety is prized for its dark purple leaves. It is expected to grow to be about 20 feet tall.

“It’s great to be able to finish what they started,” Hack said. “We’ve been continually adding beech and oak trees to our collection.”

Elmhurst’s collection of beeches includes one that Moen often pointed to as his favorite on campus: a weeping European beech just east of Old Main, not far from the site of the newest beech. Among the oaks on campus is a shumard oak near Memorial Hall. One of five Moen hauled back from a nursery in Michigan in the back of his station wagon in 1966, it was the first of the many trees he would plant on Elmhurst’s campus.

For more information on the arboretum, visit the interactive arboretum website.