October 8, 2014 | by the Office of Marketing and Communications 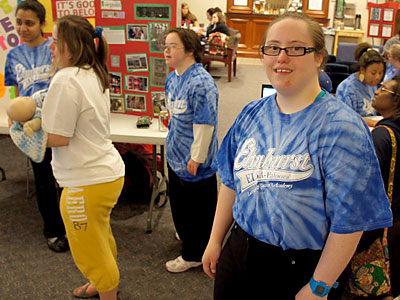 Chris Deters was relaxing in the second-floor lounge in Daniels Hall on a Wednesday afternoon in early September, chatting about his new roommates, his schedule of fall classes, and the food in the Frick Center cafeteria.

It was the kind of typical beginning-of-the-semester conversation any Elmhurst student might have been having anywhere on campus. But for Deters, a sophomore in the Elmhurst Learning and Success Academy (ELSA), a four-year non-degree program for young adults with developmental disabilities, participating in the ordinary routines of college life is extraordinary stuff. Deters is one of a pioneering handful of ELSA students living in residence halls on campus this year, the first in the program’s 11-year history to do so.

“It’s been a neat experience,” Deters said of his first few weeks living on campus. “I like the freedom of college.”

Deters shares a suite in Dinkmeyer Hall with another ELSA student and with a degree-seeking Elmhurst student who works as an ELSA community advisor. Like the degree-seeking students on their floor, the ELSA students take classes, find quiet spots to do their studying, and hone the skills they hope will make them more attractive to employers. Also like traditional Elmhurst students, ELSA students—there are 34 enrolled in the program this year—navigate the daily challenges of independent living. They learn how not to spend a month’s worth of meal-card funds in a week, how to manage deadlines for class assignments, and how long to wait before it’s okay to remove an absent classmate’s laundry from the residence-hall dryer.

“This is what college students do, and we want ELSA students to have a college experience like the one their peers have,” said LuEllen Doty, a professor of education and ELSA director. The opportunity to live on campus, she said, gives ELSA students a more complete college experience than ever. “It’s hugely important. We want them to live as independently as possible, have social experiences, do service, and thrive as college students.”

When Doty helped launch ELSA in 2003, Elmhurst became one of fewer than a dozen colleges around the country with similar programs for young adults with developmental, physical, learning or sensory disabilities. The program filled a void for young people making the transition to adulthood and increased independence. (The passage of the 2008 Higher Education Opportunity Act has since made it easier for more colleges to follow the path set by ELSA.) ELSA students earn a certificate upon completing their four-year course of study, which includes courses in English, math, science, independent living and career preparation. But from the beginning, ELSA distinguished itself as more than just vocationally focused. Its goal, then and now, has been to introduce students to the full range of academic, recreational and social life on campus.

ELSA students may supplement their required courses by auditing Elmhurst undergraduate courses. All first-year ELSA students participate in the College’s weeklong orientation, along with the rest of the entering first-year class. They join student organizations, participate in intramural sports and take on service projects. Deters, for example, is active in the College’s Asian Club and in the Pre-veterinary and Animal Welfare Society (PAWS).

This kind of integration into the general life of the campus isn’t just for the benefit of ELSA students.

“It’s a growing experience for everyone,” said Bella Masini, a senior biology major who is a teaching assistant in ELSA courses. She is one of about two dozen degree-seeking Elmhurst students who work in various capacities with ELSA students—some as life coaches or mentors, others as teaching assistants. “You’re in the same orientation group with an ELSA student in your first year, you become friends, and you find out that they’re just like you. It makes you a more mature student.”

Masini said her work with ELSA has taught her lessons she never otherwise would have learned. “[Young people with disabilities] can succeed in what they want to do, they just need the confidence and the opportunity,” she said. “And they don’t want to be treated like high school students. They’re college students.”

In the ELSA offices in Circle Hall on a recent Tuesday morning, an ELSA student named Bella Dunklau was telling a group of student-coaches about her weekend. She had participated in a 5K race, attended a dance on campus and gone to the movies with friends. “That’s a big weekend for anybody,” Annie Meuch, a sophomore psychology major and ELSA life coach, told her. Dunklau beamed.

Over the first two months of the new semester, Doty said, ELSA students’ transition to campus life has gone smoothly. She and other ELSA faculty and staff take turns monitoring a white iPhone that serves as a kind of hotline for students needing special assistance or emergency help. Doty and the others call it the Bat Phone. So far, the Bat Phone has remained mostly silent.

The residential option is not the only new development for ELSA this year. Also newly introduced is a business communication and technology certificate program. And plans are already in the works to make ELSA-Palooza 7, the program’s annual celebration and entertainment showcase, the biggest festival yet.

ELSA enrolled 10 more students this year than last year. Elmhurst President S. Alan Ray said the program has made Elmhurst “increasingly the school of choice for families seeking the benefits of an ELSA-type program.”

Back in Daniels Hall, Chris Deters was talking about the short essay he had submitted for his Narrative and Expository Writing class. He had written about his dream of one day making a living restoring classic cars. Deters holds down a part-time job at a suburban Culver’s, but as he said, “the burger business gets old really quick.” He imagines himself working on a 1972 Buick Electra “with a 455 under the hood.” Or maybe a navy blue 1964 Mustang. “That’s history, right there,” he said.

ELSA aims to help students realize such dreams. Doty told the story of a 2009 ELSA graduate named Patrick Hartman. Dissatisfied with his part-time job in sales while attending Elmhurst, he talked himself into a semester-long internship with the Progress Center for Independent Living, a disabilities rights advocacy organization in Oak Park. After Hartman graduated, he accepted a full-time job offer from the group. He later helped connect his employer with administrators from the College, so they could collaborate to provide more opportunities for Elmhurst students. He now serves on ELSA’s advisory committee. Doty said Hartman’s story illustrates what ELSA’s students can do, given some support and a little room to grow.

“For college-age people with disabilities there just aren’t a lot of options,” Doty said. “ We want our students to have options and to have opportunities.”