February 21, 2012 | by the Office of Marketing and Communications 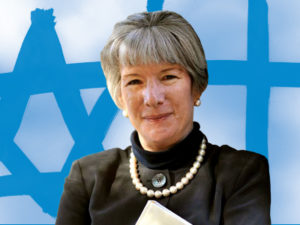 Amy-Jill Levine is a one-woman contradiction.

She describes herself as “a Yankee Jewish feminist who teaches in a predominantly Christian divinity school in the buckle of the Bible Belt.” She is indeed a feminist, yet also a member of an Orthodox synagogue, where by tradition women are required to sit apart from men.

A professor of New Testament and Jewish Studies at Vanderbilt University’s Divinity School and College of Arts and Sciences, Levine has held office in the Catholic Biblical Association and the Association for Jewish Studies, and teaches in an environment—both within her university and in the Nashville community surrounding it—that is overwhelmingly Protestant.

In all, this remarkable mix, combined with an approach she calls “provocative and unsettling” –though not without humor–suggests her February 29 presentation “Correcting Stereotypes,” won’t be your stereotypical lecture on interreligious relations.

“Too often, Christian readers divorce Jesus from Judaism,” Levine said in a recent interview with explorefaith.org. “At the very least, seeing Jesus as a Jew prevents the creation of anti-Jewish stereotypes.”

Her talk, the Abraham Joshua Heschel Guestship lecture, will address the roots and realities of “how Jews and Christians bear false witness against each other.”

“In encountering stereotypes,” Levine said in the interview, “it is usually insufficient simply to say, ‘That is wrong.’ More productive is to demonstrate how such views are wrong— and here, history is helpful.”

History runs through much of Levine’s published work. Her most recent book, The Jewish Annotated New Testament (2011, Oxford University Press) is a collection of scholarly observations that examine 1st century biblical references in the context of Jewish life of the time. In The Misunderstood Jew: The Church and the Scandal of the Jewish Jesus (2006, HarperOne), she explores how the fact of Jesus’ own Jewishness (“a Jew speaking to Jews”) was de-emphasized over centuries, often with tragic results. Levine’s talk will begin at 7:30 p.m. on Wednesday, February 29, in the Founders Lounge of the Frick Center. The lecture is free and the public is invited. For more information, call (630) 617-3390.