Opening Doors to the STEM Professions

December 11, 2015 | by the Office of Marketing and Communications 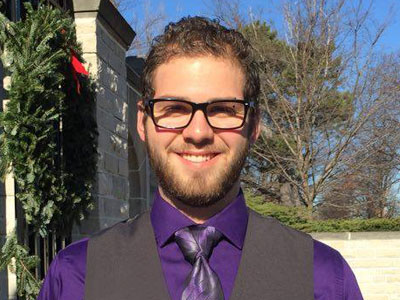 When junior mathematics major Jake Kearley began interviewing for summer internships earlier this year, he noticed that one particular section of his resume seemed to catch employers’ attention.

“At just about every interview, the first thing they would say was, ‘Oh, I see you have some research!’” Kearley recalled.

Indeed, thanks to an innovative Elmhurst College program called the Keystone Project, Kearley had not only conducted independent research under the direction of one of his Elmhurst professors, he had also presented the findings of his research at a national mathematics conference in Portland, Oregon. The experience gave Kearley early exposure to the world of mathematics research, won him invitations to speak at other college campuses, and helped him land a summer 2016 actuarial internship with American Family Insurance in Madison, Wisconsin.

Elmhurst’s Keystone Project is an effort to encourage student success in the so-called STEM fields—science, technology, engineering and mathematics. Studies have shown that only about half of first-year students who say they intend to major in STEM fields actually graduate with degrees in those fields within six years. The program, launched in 2013 with major funding from the National Science Foundation, aims to increase the number of graduates in biology, chemistry, computer science, exercise science, mathematics, physics and cognitive psychology at Elmhurst by 36 percent.

“We want students to be excited about these fields, and they are definitely excited about the opportunity to do research,” said Jon Johnson, professor of mathematics and principal investigator for the Keystone Project. Students can enroll in new research-based January Term courses and participate in summer research experiences that provide an introduction to the rewards and responsibilities of collaborative investigations.

As Kearley discovered, undergraduate research experience can be a powerful credential for job-seeking students.

“I think my research really set me apart,” he said.

Kearley spent part of the summer working with Professor Allen Rogers on his Keystone project, in which he examined reflections of lines across a curve—a thought-provoking and meatier twist on a basic calculus problem. The topic was proposed by his professors in the mathematics department, but Kearley quickly took ownership of the problem. Part of his investigation involved creating a computer animation illustrating how forms created by such reflections might take shape.

“Right from our first meeting, he did more with the problem and took it further than I would have anticipated,” said Rogers.

Johnson said that during this academic year, about 150 Elmhurst students have participated in the seminars, courses, guest lectures and research projects organized by the program. Keystone Project investigations have prepared Elmhurst students for prestigious national endeavors like the National Science Foundation’s Research Experiences for Undergraduates (REU). Senior Kacey Suvada’s Keystone experiences led to an REU in physics and fluid dynamics at the University of Chicago last summer. She is now applying to graduate programs in neurobiology. Senior Anders Winquist-Bailey earned an REU internship at Rutgers University’s marine biology research station in New Jersey, after having participated in the Keystone Project’s courses and seminars.

“The experiences they had here really prepped them for doing an REU,” Johnson said. “It’s so valuable to go through the program.”

That’s part of the message Kearley now delivers to first-year students at Elmhurst. He is one of seven peer mentors who visit introductory-level STEM classes to talk about the opportunities the Keystone Project provided him.

“It was one of the best experiences of my life, and I want everyone to have the same opportunity,” said Kearley, who is planning to pursue a career as an actuary.

Kearley works with about 30 first-year students, meeting with them and helping organize study groups. He encourages first-year students to participate in the Keystone Project by pointing to his own experiences. He tells them how the program gave him opportunities to travel, to collaborate with his professors, to practice speaking before large audiences. He also tells them that they would not find such opportunities at every college.

“My friends at other colleges can’t believe some of the things I’ve had the chance to do,” Kearley said. “I know how exciting it can be to do research, and I want to share that excitement.”