August 7, 2019 | by the Office of Marketing and Communications 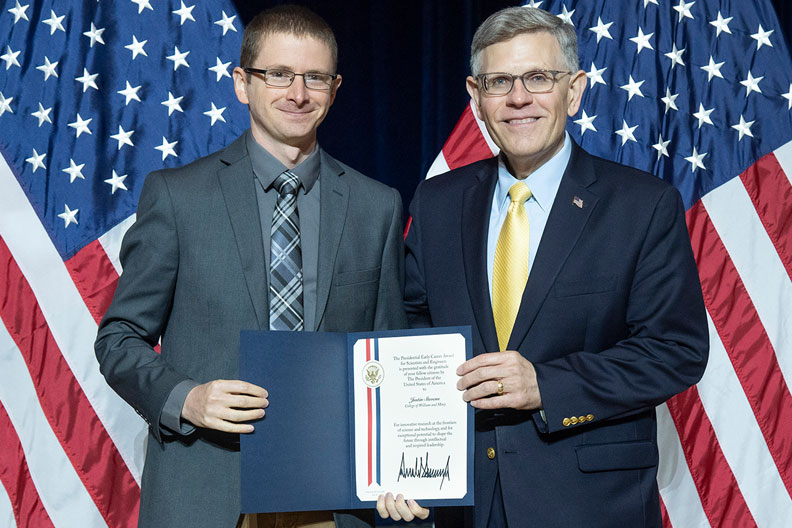 The White House has named Justin Stevens ’07, now an assistant professor of physics at the College of William & Mary, a 2019 recipient of the prestigious Presidential Early Career Award for Scientists and Engineers. The award is the highest honor bestowed by the U.S. government on young scientists in the early stages of their independent research careers.

In addition to teaching and running a physics lab at William & Mary, Stevens has a bridge appointment with the nearby Thomas Jefferson National Accelerator Facility, where he’s part of a team of more than 100 international physicists and engineers working on an ambitious experiment named GlueX.

“I’ve been told that I’m living the dream, and I think that’s exactly correct,” said Stevens, laughing. “If you would have told me as an undergraduate at Elmhurst College that this is what the future held, I don’t know that I would have believed you.”

Stevens and his collaborators are using a massive detector to identify one of the smallest building blocks of matter in the universe, the gluon. Gluons are responsible for creating what is known as the Strong Force that binds together protons and neutrons—which are themselves composed of smaller particles called quarks.

“You can think of gluons as a spring that holds together these quarks inside of a proton,” Stevens explained. “And as you stretch them farther apart, they gain energy and want to snap back into smaller-size configurations. We want to study the properties of these gluons that hold the quarks together.”

Specifically, the GlueX project is searching for signs of an “excited” form of gluon called a hybrid meson. It’s an experiment that Stevens has been working on since he was a postdoctoral researcher at Massachusetts Institute of Technology. After MIT, he was hired by the Jefferson Lab to continue with GlueX and then by William & Mary, where he received a five-year Early Career Award from the Department of Energy to fund his lab and pay for his own team of graduate students and postdoctoral researchers.

Now Stevens splits his time between unraveling one of the fundamental mysteries of the universe and teaching graduate and undergraduate courses at William & Mary.

Stevens can pinpoint the exact conversation with an Elmhurst professor that led him down the path to becoming a particle physicist. He came to campus for a visit before his first year and met with the late Earl Swallow, who spent nearly four decades in the Elmhurst physics department. At the time, Stevens thought he wanted to be an engineer.

“Then we talked about Professor Swallow’s research at Fermilab, a Department of Energy national lab near Chicago,” Stevens said. “He got me pretty excited about this idea that I could work with big detectors and particle accelerators, a possibility that I hadn’t even considered before.”

Mathematics Professor Catherine Crawford knew Stevens throughout his four years at Elmhurst and calls him one of the top students she’s taught during her 19 years at the College.

“Not only was Justin strong academically, but he was mature and successfully balanced his academic work with other interests, such as the cross-country team, and his responsibilities as a resident advisor,” Crawford wrote in an email. “His ability to excel academically showed a lot of self-motivation and discipline. In fact, when other students were struggling merely to get to our 8:15 a.m. calculus class, Justin had often already gone on a morning training run!”

The real turning point for Stevens at Elmhurst was the summer he spent at Indiana University as part of the National Science Foundation’s Research Experiences for Undergraduates program. At Indiana, Stevens spent a glorious 10 weeks doing what he calls his first “real research project.”

“That got me hooked,” Stevens said. “And that’s where I wound up going for my Ph.D. and working on the same experiment that I started out with as an undergraduate at Elmhurst.”

Stevens’ summer experience at Indiana, plus the relationships he forged with Elmhurst professors and active researchers like Swallow and Crawford, highlight the tangible benefits of a STEM education at a college with just over 2,600 undergraduate students.

“As a smaller liberal arts college, Elmhurst College faculty are able to develop strong mentoring relationships with their students that weave throughout the students’ coursework, research and career goals,” Crawford wrote. “We know our students and they know we are supporting them and want to provide as many opportunities as possible for them to succeed.”

Now that he’s a professor and professional researcher himself, Stevens is ready to be that mentor for the next generation of scientists who will continue to probe the deepest mysteries of matter. His first team of undergraduate research assistants from his William & Mary group are now heading off to their own doctoral programs.