January 20, 2012 | by the Office of Marketing and Communications 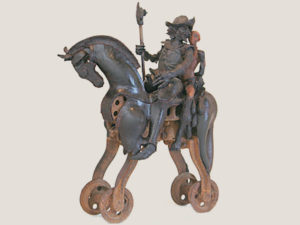 Preston Jackson’s work is about the life of a people whose history and culture were considered to be irrelevant to many Americans.

As a painter, sculptor and art educator, Jackson tells the stories of his people, sharing their universal truths.

Elmhurst College will host Jackson’s exhibit Inside the Outside from Sunday, January 22, through Friday, February 17, as part of the College’s celebration of Black History Month. A reception for Jackson will be held on Thursday, February 9.

As an artist, Jackson specializes in bronze and steel sculpture and painting. His large-scale outdoor sculptures, as well as his smaller bronze pieces, have been exhibited widely across the country.

The Inside the Outside exhibition will feature both Jackson’s extraordinary bronze sculptures and large-scale paintings.

“I am thrilled that Preston Jackson will be showing his work at Elmhurst College,” said Suellen Rocca, director of exhibits. “His works so powerfully tell the story of his history and express the beauty and grace of the human figure.”

Jackson’s commissioned art works include a life-size bronze Jean Baptiste Point du Sable in Peoria; a bronze façade and doors for the Cahokia Mounds Museum; “Let’s Play Two,” a bronze relief of Ernie Banks for ESPN Zone in Chicago; “Dr. Dan,” a bronze bust of surgeon Dr. Daniel Hale Williams for Northwestern University; and a cast bronze sculpture of Irv Kupcinet for the City of Chicago. Inspired by African-American oral tradition, Jackson’s series “Fresh from Julieanne’s Garden” reveals the lives and personalities of his ancestors who lived in the South in the 19th and early 20th centuries.

An emeritus professor of sculpture at the School of the Art Institute of Chicago, Jackson also is a Laureate of the Lincoln Academy of Illinois, the highest honor in the state given to individuals.

Inside the Outside will run from Sunday, January 22, through Friday, February 17, in the Founders Lounge of the Frick Center. The Frick Center is open days and evenings.

A reception for Jackson will be held in the Founders Lounge on Thursday, February 9, from 4:30 to 6:30 p.m., with an Artist’s Talk at 5:00 p.m. Both the exhibition and the reception are free and open to the public.

The Black History Exhibition is one of about a dozen shows that Elmhurst College will present this academic year in three campus venues. For more information, please contact Suellen Rocca at (630) 617-6110.