Home » News » Read All About It

Read All About It

October 2, 2013 | by the Office of Marketing and Communications 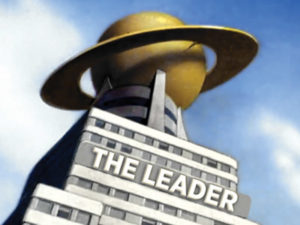 One of the rites of the new school year at Elmhurst is the appearance of the annual Orientation Issue published by the College’s acclaimed student newspaper, The Leader.

This year’s issue offered the usual candid introduction to the College, including a guide to studying abroad, a profile of Elmhurst President S. Alan Ray, and “10 Ways for Broke-Ass Students to Save Money.” All of it was delivered in the paper’s distinctive, sometimes irreverent, editorial voice. The Leader has been named the best small-college paper in the state by the Illinois College Press Association five times in the last eight years.

Q: Haleema, like a lot of Leader editors before you, you spent a big part of your summer working on the Orientation Issue. Can you tell me about one of the stories from that issue that you really liked?

Shah: In addition to stories about the things you need to know to survive on campus, we did little profiles of 10 people on campus who are very influential. We called it “The Ten People You Don’t Want to Piss Off.” These are people who you want to get to know, but because they have so much influence, you don’t want to make them angry. We had a lot of fun with it.

Q: That’s a great example of the slight irreverence that is part of the paper’s voice. Is that something you try to cultivate?

Shah: We don’t necessarily set out to be irreverent all the time, but we do set out to have a very clear student voice. And when you have a bunch of college students in a newsroom together, you can start to sound a bit irreverent.

Q: Ron, you teach a couple of journalism classes in the English department. But I’ve also seen you in action, working one-on-one with the paper’s staff, critiquing their work after the paper comes out. Is The Leader itself a journalism classroom?

Wiginton: Very much. We consider The Leader our journalism laboratory. The students can get academic credit for their work, because we value the experience they’re getting as student-writers.

Q: What do you want students to learn from working on the paper, both about journalism and more broadly?

Q: Haleema, one of the remarkable things about the good journalism The Leader produces is that there is no journalism major at Elmhurst. Everyone at the paper is studying something other than journalism. What are some of the subjects you and your editors are studying?

Shah: I’m a double major in economics and history. This year on the editorial board, we have a wide mix of majors—political science, philosophy, psychology, English.

Shah: So far the latest we’ve stayed here is until 8:30 a.m. The longest I’ve been in the newsroom straight is 22 hours. And once the sun begins to rise, you see a whole new side of people. You get to know your fellow editors a lot better, definitely. Deadlines can be a stressful time but it’s also a really fun time.

Q: Given that enormous investment of time and energy, what do you get out of working on The Leader and why do you do it?

Shah: I want to be a journalist, and this is the best way for me to get experience. I’ve learned a lot about journalism and about myself. I’ve learned that I work really well under pressure. And I’ve learned about the importance of keeping an eye out for information and being aware of what’s going on around you. I know more about picking out a story and understanding news value: what’s going to affect people and what people will want to know.

Wiginton: In other words, all the characteristics of a good journalist.

Q: Ron, how do you explain your students’ commitment to the paper?

Wiginton: The kids who are doing this are not in college just to goof off. They want to make a difference. That’s one of the things I’m most proud of, and it’s why we’re so good. They’re smart people, and they’ve become committed to the principles of journalism. And people who pursue the truth tend to be a lively group of people. With a little bit of irreverence, it works out.

Q: Haleema, I know editing The Leader is not your only practical experience in journalism. Can you tell me about your internship in 2012 at Vocalo, the Chicago Public Media service?

Shah: I was a production intern at Vocalo for the summer. I did a lot of news gathering and pitching stories to talk about on a live call-in public affairs show. I walked in knowing absolutely nothing about how to make a radio story, and now I’m a regular contributor for Vocalo. I really recommend getting that kind of hands-on experience. Do internships. Get involved with your college media.

Q: One of the things you’ve had to learn as an editor in chief is how to manage people. Have you embraced the opportunity to boss your staff around?

Shah: [Laughs] Bossing people around is definitely a lot of fun, and I embrace it to the point where I worry if I’ll be addicted to management by the time I’m out of here. When I became editor in chief, I inherited a staff of about 40 people and an editorial board of about 12. I’ve learned to make tough calls and make them quickly.

Q: Ron, what’s your recruiting pitch to any high school journalists who might be reading?

Wiginton: Within a few weeks of arriving on campus, you can have a byline, which you can’t do at a larger school. Anyone can join, and once you join, you’ll learn real quick. And how often do you have the chance to work for an award-winning newspaper?