Home » News » Returning to a Path Not Followed

Returning to a Path Not Followed

July 7, 2014 | by the Office of Marketing and Communications 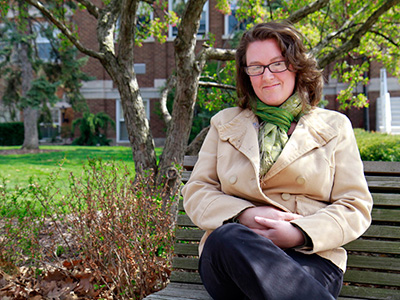 For Heather Miller, it came down to the flip of a coin.

Twenty-five or so years ago, Miller was a high school student in the suburbs of Detroit wrestling with a question she could not seem to answer: Did her future lie in the world of business or in science?

“I was torn between the two,” recalled Miller, now a non-degree-seeking student at Elmhurst, during a break in her work in a lab at the Schaible Science Center. Miller was explaining the circuitous route that brought her to Elmhurst, where she is winning honors for her research while preparing for doctoral studies in microbiology, and where some of her fellow students are decades her junior. “I literally flipped a coin,” she said of the decision she made years ago.

“I told myself that if it didn’t work out, I could always go back later and change.”

That change, it turns out, did not come until after Miller had graduated from Western Michigan University and spent 15 successful and lucrative years in business, most recently as a consultant with the accounting giant PricewaterhouseCoopers in Chicago. Miller liked her work there—it took her around the world to meet with her Fortune 500 clients—and she was good at it. But Miller never forgot about the path she didn’t take.

So one day in 2009, she asked her bosses for a short sabbatical. She wanted to go back and take some of the college science courses she had missed the first time around.

She started slowly, taking a few classes at community colleges and at the University of Illinois at Chicago. Reinvigorated by her old passion for the sciences, she resigned her position at PricewaterhouseCoopers and went off to pursue a master’s degree in marine biology at James Cook University in Australia. Her time down under proved disappointing. Dissatisfied with the quality of the program, she returned to Chicago after just one semester. She had no plans.

“It was the lowest I’ve ever experienced,” she remembered. “I was trying to figure out what to do next.”

She took up residence with old friends in Elmhurst, who suggested she check out the nearby college. Miller liked what she found there.

“It was more challenging [than the graduate program she had come from], and I developed great relationships with my professors,” she said. “I never looked back.”

Last year, Miller began collaborating with Associate Professor of Biology Tamara Marsh on research into the role of microbial communities in traditional Native American agriculture. Miller investigated the role of several kinds of soil bacteria in the success of combined plantings of beans and corn, which along with squash make up the so-called Three Sisters that are a staple of traditional Native American farming. The three crops thrive in close proximity, each benefiting from the presence of the others. Tall cornstalks provide a structure for beans to climb; beans supply nitrogen that enriches soil; and low-growing squash offers ground cover that discourages weeds and retains moisture. But scientists continue to seek a fuller understanding of how microbial communities beneath the ground may encourage successful cultivation of the Three Sisters.

Miller found that soil enhanced with rhizobia, a kind of symbiotic bacteria that fix nitrogen on the roots of bean plants, produced greater plant masses than did non-enhanced soil. But she found that the presence of rhizobia produced no changes in the quantities of two other kinds of soil bacteria she studied. “I suspect there is more going on beneath the ground than we know about,” she said.

Miller presented her findings at a regional honors biology conference and at the College’s annual Research and Performance Showcase, where she won the award for best oral presentation. She is now writing up her research for publication in a professional journal.

“It was such a collaborative experience. [Marsh] shared her expertise and her guidance and I was soaking it all in. I got everything I could possibly get out of it,” Miller said. “I couldn’t have asked for more.”

Miller is spending this summer on another investigation. Funded by a $7,000 grant from the College, she is exploring the effect of hydraulic fracturing—the controversial method of tapping underground reserves of natural gas and oil—on aquatic microbial life.

She is examining water and soil samples from several sites in Shawnee National Forest, Beall Woods State Park and Cave-in-Rock State Park, all in southern Illinois. Miller is interested in comparing samples from upstream and downstream of a recently opened natural gas well in Wayne County. Bacteria and other microbes, she said, can serve as early indicators of environmental distress. “We see changes there first and only later in bigger organisms,” she said.

Miller expects to find more diverse bacterial communities upstream from the well than downstream. She wants to know if hydraulic fracturing affects concentrations of sulfate-reducing bacteria and denitrifying bacteria, both of which play parts in healthy aquatic environments.

As she explained her work in the lab on the science center’s first floor, Miller was surrounded by brown glass bottles and white plastic jugs labeled with the various chemicals used in hydraulic fracturing fluids—naphthol, methanol, glycerol, ammonium chloride, among others. She is creating her own homemade fracturing fluid, so she can subject her samples to simulated spills and assess the effects.

Miller says this summer’s research is a sliver of a larger investigation that she hopes will form her doctoral dissertation. She will apply to graduate programs this fall, and said she is considering Michigan State, Rutgers and the University of California-Berkeley.

The research she is doing at Elmhurst, Miller said, helps her demonstrate her readiness to do advanced research as a doctoral student.

“This has been fantastic,” she said of her time at Elmhurst. “It gave me the opportunity to develop.”

And the chance, finally, to follow a path not taken years ago.