Senior Hannah Bacon is Named 2021 Lincoln Laureate for Elmhurst U.

December 14, 2021 | by the Office of Marketing and Communications 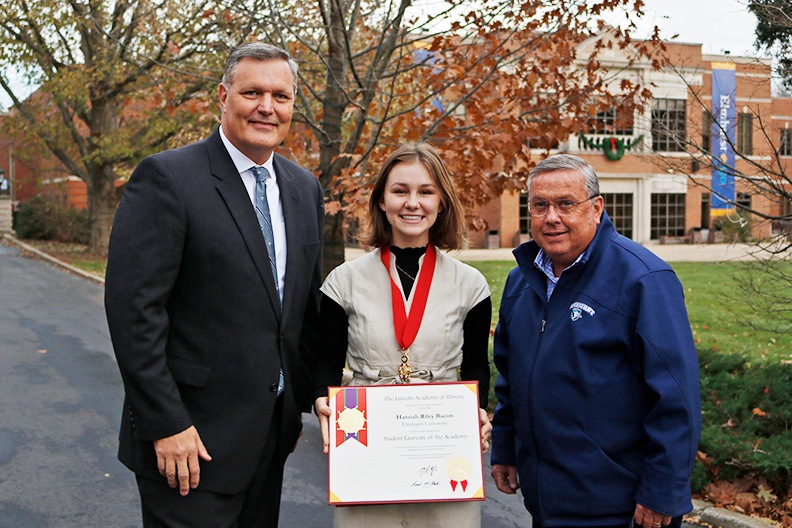 Bacon was among the top students representing Illinois’ colleges and universities to be honored with the award, presented by The Lincoln Academy of Illinois.

In the spirit of the 16th U.S. president, student laureates are honored for their leadership and service in the betterment of humanity, and for overall excellence in curricular and extracurricular activities. The award recognizes seniors who are selected from each of Illinois’ four-year, degree-granting colleges and universities, and one student from the state’s community colleges.  This year, each student laureate received a $500 Abraham Lincoln Civic Engagement Award, a Lincoln medallion and a certificate of merit signed by the governor.

The Lincoln Academy Student Laureate ceremony historically is held every fall at the Old State Capitol State Historic Site in Springfield. But the event was held virtually this year due to COVID-19 restrictions on large in-person gatherings. Elmhurst University President Troy D. VanAken presented Bacon with her medal and certificate on campus earlier this month.

Bacon said she was honored to receive an award named for Lincoln, a president whose ability to work with people with different viewpoints has inspired her in her own pursuits. A political science and environmental studies major at Elmhurst, Bacon is active in a number of student and campus organizations. She is captain of the women’s soccer team, president of the Greenjays sustainability club, and was senator of sustainability for the Student Government Association. She also is a head resident advisor, and has collaborated with faculty on research projects through the Creative and Scholarly Endeavors program.

“Being chosen to represent Elmhurst University is awesome because in my time here, I’ve worked really hard in my classes and tried to make a difference in the community, and it’s great to be recognized for that,” she said. “I think that what I’ve learned here as a change-maker will carry over beyond my campus life.”

After graduation, Bacon, who is from Cincinnati, plans to take a year of service with a charitable organization or ministry, and “take a deep dive into a community,” she said.