October 20, 2015 | by the Office of Marketing and Communications 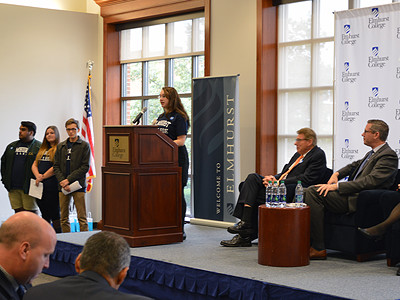 Her parents, both in their 60s, have had serious health issues recently that have kept them from working. But Lutka can attend Elmhurst College because of a generous financial aid package that includes a Monetary Award Program (MAP) grant from the State of Illinois.

Lutka calls the MAP grant “a blessing to me and my family,” and says she wouldn’t be able to go to Elmhurst without it.

Lutka and nearly 200 other people, including Elmhurst College students and faculty, state legislators, and representatives from area colleges and universities, joined Illinois Treasurer Michael Frerichs at Elmhurst College on Tuesday, October 13, to urge Gov. Bruce Rauner and the Illinois General Assembly to authorize the funding for MAP grants.

Over the past few months, Frerichs has visited several Downstate college and university campuses to lobby for the release of MAP funding, which has been in limbo because of the budget stalemate in Springfield. MAP grants help 130,000 students across the state to pay for their higher education.

“We are here for the students. That is why it is so important that their voices are heard,” Frerichs said. “Financial aid is not a luxury. Rather, it is the tool that allows students to pursue their dreams. The governor and the General Assembly should work together and pass a budget so our students can focus on the future.”

The Monetary Award Program provides grants, which do not need to be repaid, to Illinois residents who attend approved four-year colleges and universities and community colleges in the state, and who demonstrate financial need. More than 25 percent of Elmhurst College undergraduates are set to receive MAP grants.

Many higher-education institutions, including Elmhurst, recognized that without the MAP grant, recipients would face the difficult decision of whether they could afford to continue with their studies. For the 2015 Fall Term, these colleges and universities credited students’ accounts the amount they were eligible for, with the expectation that they would be reimbursed by the state when the budget impasse is resolved.

“The 738 students at Elmhurst who are set to receive MAP grants run the gamut of majors,” President Braskamp said. “They are studying everything from business to kinesiology, nursing to education, computer science to music. Think about the contributions they will make to our community, our state, our world. We must allow them to stay at colleges like Elmhurst and excel in their fields. We all will benefit as a result.”

Durkin said, “I want to get a budget resolved soon and not have any people left on the sidelines.” He said he supports MAP, and encouraged students to talk about what the grant money has meant for them, promising to share those stories with his colleagues in Springfield.

Jacob Henry described growing up in a tiny farming town in southern Illinois, where the cost of living and household incomes are significantly lower than in the Chicago area. Having the MAP grant and other financial aid enabled him not only to attend Elmhurst College but also to study at the University of London and travel around the world through the Semester at Sea program.

Grace Bellino, a junior at Elmhurst College who is double majoring in history and theatre and minoring in Spanish, is a member of the Elmhurst College Honors Program and president of the Student Government Association. She is preparing for a career in global health.

“All of my accomplishments, and all that I hope to accomplish with my education and future career, would not have been possible without my financial aid package, of which the MAP grant is a substantial portion,” she said. “To have the support of the MAP grant is a vital part of my ability to attend Elmhurst College, and without it, I would not be the person that I am today.”

To contact your local legislators about MAP grants, you can find their names and contact information under the Legislative Branch section of the State of Illinois website.

SB 2043 is the Illinois Senate Bill that deals strictly with MAP grant funding. It has passed the Senate and is currently awaiting action in the House.